The 2015 NFL season was the 96th season of American football in the National Football League (NFL). The regular season began on September 10, 2015 with the annual kickoff game of the reigning Super Bowl winner New England Patriots against the Pittsburgh Steelers . The play-offs began on January 9, 2016 and ended with Super Bowl 50 on February 7, 2016. 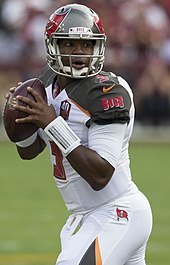 Jameis Winston was selected as the first player in the 2015 NFL Draft.

The 2015 NFL Draft ran from April 30th to May 2nd. For the first time since 1965 it was not held in New York , but in Chicago. Since the Tampa Bay Buccaneers had the worst record in the past 2014 season , they had the right to select the first player in the draft. With the first round pick they chose the quarterback and winner of the Heisman Trophy Jameis Winston of Florida State University .

The regular season began on September 10, 2015. It comprised 256 games played in 17 game weeks, with each team playing 16 games and having a game-free week ( bye week ) between the fourth and twelfth week. 17 games were played as Monday Night Game , two of which were double headers in the first week. There were also 17 games on Thursday night , starting with the opening game on September 10th and games on Thanksgiving . Last weekend all games took place on Sunday and all teams met - as has been the case since 2010 - against an opponent from their division.

Each team played against 13 other teams . It played twice against the three other teams from its division (six games together). In addition, each team played - on a rotation basis - against all four teams from a different division of its conference (four games in total). Another two games were played against the two remaining teams in the same conference, which ended in the same place as the opposing team in their division the previous season (if a team finished third, it would play against all three third-placed teams in its conference). The remaining four games were played in an inter-conference comparison. To this end, two divisions meet on a rotation basis. In the 2018 season, the schedule provided for the following distribution:

The new point-after-touchdown rule ensured that more attempts at extra point were missed after just two match days (9) than in the entire previous season (8). In addition, the Pittsburgh Steelers became the first NFL team in 17 years to attempt a two-point conversion in the first quarter . On December 6th, Stephone Anthony was able to achieve a defensive two-point conversion for the New Orleans Saints for the first time in the NFL after a blocked PAT attempt by the Carolina Panthers .

Games in the NFL International Series

The play-offs began on January 9, 2016 with the Wild Card Round and ended on February 7, 2016 with Super Bowl 50 at Levi's Stadium in Santa Clara, California . In this the Denver Broncos and the Carolina Panthers faced each other. The Broncos defeated the Panthers 24:10 and were able to win the Vince Lombardi Trophy for the third time . Von Miller was voted Super Bowl MVP after the game .

The Super Bowl 50 was broadcast on CBS . The NFL decided to name the Super Bowl with the Arabic number 50 instead of the Roman numeral L. The reason for this is the difficulty of converting the logo into a graphic with just one “letter”.

For the first time since the changes in the play-off system in 2002, all away teams won the wildcards.

On February 6, the evening before Super Bowl 50 , the best players of the 2015 season were honored.

The following season bests were achieved in 2015: