The Philadelphia Eagles are an American football team of the US professional league National Football League (NFL) in Philadelphia , Pennsylvania . They belong together with the Dallas Cowboys , the New York Giants and the Washington Football team of the Eastern Division within the National Football Conference (NFC). Since 2003, the team has played its home games at Lincoln Financial Field , which holds 68,532 spectators.

In 1933, a group of investors led by Bert Bell and Lud Wray were able to acquire an NFL license for $ 2,500  . The original owners of this license, the Frankford Yellow Jackets , had ceased operations at the end of 1931. The name was changed to Philadelphia Eagles and officially joined the NFL as a new team on July 8, 1933 , along with the Pittsburgh Steelers and the Cincinnati Reds .

In 1943, World War II forced the Eagles to join forces with the Pittsburgh Steelers . The team appeared as the Philadelphia-Pittsburgh Steagles that season . However, this merger only lasted one season; from 1944 the team played again under the old name. At the end of the 1940s, the Eagles were able to achieve their first successes under the direction of head coach Ealre Neale and running back Steve Van Buren . While they failed at the Chicago Cardinals in 1947 , they won the NFL championship in both 1948 and 1949. The Eagles managed to not allow a point on either occasion.

The Eagles won the third NFL championship in 1960. The two current Pro Football Hall of Fame players Norm Van Brocklin and Chuck Bednarik had a significant share in the title win . Head coach at the time was Buck Shaw .

In 1969, Leonard Tose bought the Eagles for $ 16,155,000, a record at the time. His first official act was the dismissal of the then coach Joe Kuharich . Jerry Williams became the new head coach. When the NFL and AFL were merged in 1970 , the Eagles were put into NFC East. In 1980, the Eagles reached the Super Bowl ( Super Bowl XV ) for the first time , but narrowly failed at the Oakland Raiders .

Tose sold the team again in 1985 for $ 65 million. The new owners of the team were Norman Braman and Ed Leibowitz .

The 1980s were overshadowed by fan unrest, primarily due to sporting failures. In 1986 Buddy Ryan took up the post as head coach and sparked the usual fan support by rejuvenating the team. Between 1988 and 1996, the Eagles were able to qualify six out of nine times for the play-offs (but only once as the winner of the NFC East), but won only two of a total of eight games. One of those six losses was in 1988 in the bizarre Fog Bowl against the Chicago Bears . However, some stars such as Randall Cunningham and Keith Jackson developed ; The defensive line with players like Reggie White , Jerome Brown, Wes Hopkins and Eric Allen stood out in particular . On May 6, 1994, Jeffrey Lurie bought the Eagles from Norman Braman for $ 195 million.

The team became really successful around the turn of the millennium . In 1999, head coach Andy Reid was hired, and quarterback Donovan McNabb was brought to Philadelphia. As a consequence, the team reached the play-offs again in 2000. From 2001 to 2004 the Eagles were able to win the NFC East four times in a row. While they failed in the play-offs for the first three years (2001 at the St. Louis Rams , 2002 at the Tampa Bay Buccaneers and 2003 at the Carolina Panthers ), Reid and the team finally reached the again in 2004 after 24 years Super Bowl ( Super Bowl XXXIX ). There, however, they lost to the New England Patriots with 21:24.

After a season marked by injuries and bad luck in 2005, the Eagles were able to reach the play-offs again in 2006 as division winners, but later failed at the New Orleans Saints . In 2007 , the Eagles failed to make it into the play-offs. They finished the season after a rather below average performance with eight games won and eight lost in fourth place.

The 2008 season was a roller coaster season for the Eagles. In week eleven they drew 13:13 against the Cincinnati Bengals , which was last achieved by a team in 2002. The Eagles only secured play-offs in the last game of the season when they defeated their direct opponents, the Dallas Cowboys , with 44: 6 and thus overtook the Cowboys. There the Eagles met the Minnesota Vikings in the wildcard play-off game , who they beat with 26:14. A week later they managed a 23:11 victory against the Giants at the Giants Stadium . In the NFC Championship Game , however, they failed at the Arizona Cardinals with 25:32 and thus lost the fourth of five NFC Championship games in the last eight years.

In the 2012 season, the Eagles missed the play-offs and head coach Reid was sacked.

On 16 January 2013, as the 21st coach Chip Kelly set, the previously in college football , the Oregon Ducks of the University of Oregon trained. Kelly was released on December 29, 2015, a week before the end of the regular season of the 2015 season .

After the season, Doug Pederson , then offensive coordinator of the Kansas City Chiefs, was named the new head coach. In the subsequent draft , the Eagles had the 13th pick in the first round. However, you exchanged the draft rights and some players with other teams, which in the end secured the second pick in the draft. With these, those responsible selected the quarterback Carson Wentz , who was appointed starting quarterback at the beginning of the 2016 season . Sam Bradford , who was previously with the Eagles starting quarterback, was swapped for the Minnesota Vikings, as their quarterback Teddy Bridgewater was injured for the season.

On February 4, 2018, the Eagles won the Super Bowl for the first time . Led by the later Super Bowl MVP Nick Foles , they beat defending champions New England Patriots in Super Bowl LII with 41:33 .

Nevertheless, the Eagles started the 2018 season with Carson Wentz as starting quarterback . Despite an interim record of 4-6, they qualified for the play-offs on the last day of the game. As in the previous season, Nick Foles took Wentz's place as playmaker after an injury from week 15. In the Wild Card Round, the Eagles narrowly won the Chicago Bears 16:15 after defensive tackle Treyvon Hester blocked the field goal of kicker Cody Parkey while time was running out. In the Divisional Round, the team then lost to the New Orleans Saints despite leading at halftime with 14:20. After the season, Super Bowl MVP Nick Foles moved to the Jacksonville Jaguars . The contract with Carson Wentz, who is to lead the franchise in the longer term, has been extended to 2024.

In 1971, Fred Hill's daughter of the Eagle Tight End , Kim Hill, contracted leukemia . After the news, both teammates and owner Leonard Tose expressed their condolences. While Kim was fighting leukemia, the Eagles launched fundraising campaigns. After their healing, the Eagles players realized how powerful this appeal was and continued the fundraiser. In 1972, the charity event finally became a tradition.

The Eagles turned to Aktion McDonald's Kinderhilfe . It has over 200 Ronald McDonald houses worldwide that accommodate thousands of families. The campaign was a success: 30 years later, over 6.5 million euros have already been donated.

The Eagles Youth Partnership (EYP) campaign is aimed at around 50,000 children and young people from families with poorer incomes and was founded in 1995. Two buses are sent to the Greater Philadelphia area annually for this purpose. While the “Eagles Eye Mobile” offers final exams, the second bus, the “Eagles Book Mobile” includes a small library. The campaign is also committed to other things, such as B. the renovation of playgrounds. The program also organizes its own chess tournaments.

The Philadelphia Eagles have a large fan base, including celebrities like Will Smith . The Eagles' home games are always sold out and there are now 60,000 fans on the waiting list for season tickets. Even in bad times, the fans stand by their team. Despite poor performance during the 2005 season , it was able to post the second highest merchandising income in the following season. In general, the Eagles' fans are considered enthusiastic and loyal, but are sometimes also characterized by their rude behavior. A well-known example is the so-called Santa Claus Incident ( German roughly: Santa Claus incident) in 1968. At that time, fans of the Eagles clearly showed their displeasure with the messed up season by whistling loudly at halftime and a man disguised as Santa Claus with snowballs pelt. Other incidents included:

Members of the Pro Football Hall of Fame

Jersey numbers that are no longer awarded 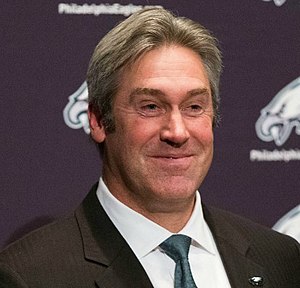 The following people were coach of the Philadelphia Eagles and played one or more games (as of January 11, 2020).

Philadelphia Eagles / Numbers and Records represents important records for the Eagles, the direct comparisons with the other American football teams, the season balance since 1933 and the first round draft picks since 1936.