The Las Vegas Raiders (English for "Las Vegas robbers / looters") are an American football team of the American professional league National Football League (NFL) from Paradise , Nevada, a suburb of Las Vegas . They belong together with the Denver Broncos , the Kansas City Chiefs and the Los Angeles Chargers of the Western Division within the American Football Conference (AFC). In 1960, the Raiders began playing in the American Football League (AFL), in which they celebrated a championship and three times were division winners. Due to the merger of the AFL with the NFL in 1970, the Raiders joined the NFL. The Raiders have since been twelve-time division winners and played five Super Bowls , which they won three times: Super Bowl XI , Super Bowl XV and Super Bowl XVIII . The Raiders have 13 members in the Pro Football Hall of Fame .

The American Football League was launched on August 14, 1959. The Oakland Raiders were not among the eight founding members, but moved only in January 1960 for the National Football League exchanged Minnesota Vikings after. A main reason for this was that there was no adequate stadium in Oakland. Until the Oakland Coliseum , which could hold 54,616 spectators, opened in 1966 , the Raiders had to play at Kezar Stadium or Candlestick Park , on the other side of San Francisco Bay . The first few years of the club's history were marked by difficulties both on and off the field. The result of the first three seasons was a record with only nine wins out of 33 defeats. The number of viewers remained consistently below 11,000 per game. That changed with the engagement of Al Davis as head coach and general manager. The former assistant coach of the San Diego Chargers managed to form a successful team within a short time. The 1962 season had ended with a win with 13 defeats, followed by Davis in 1963 a season end with 10-4 wins. Davis was promptly named AFL Coach of the Year . With the three best-known slogans Al Davis' "Pride and Poise", "Commitment to Excellence" and "Just Win, Baby", all of which are registered trademarks, the Raiders from 1965 to 1985 were able to show the best final results of the AFC West 19 times . During this time they won twelve titles, the AFL championship in 1967, the AFC championship in 1976, 1980 and 1983 and the XI , XV and XVIII Super Bowls . The Raiders were also the only team in the AFL and NFL to win the Super Bowl in the 1960s, 1970s and 1980s, respectively. The Raiders also played in 1968 in the famous "Heidi Game" (43:32 against the New York Jets ), in which NBC stopped broadcasting the game at 29:32 and showed the children's film Heidi returns home , so that TV viewers saw the missed both of the Raiders' last minute touchdowns. The Raiders involuntarily ensured that all football broadcasts have been broadcast in full since then. After joining the Raiders, Davis left the team in 1966 to become AFL Commissioner , but returned in 1967 to take over management of the club. Until his death in 2011, the Raiders were under his personal leadership.

Due to legal disputes that lasted for several years, Davis decided in 1982 to move the traditional club to the Californian metropolis of Los Angeles . Between 1982 and 1995, the then Los Angeles Raiders qualified seven times for the play-offs and won their third Super Bowl in 1984. The Raiders returned to Oakland in 1995 due to the ongoing disputes over building a new stadium.

However, success did not come back until Jon Gruden was hired as head coach in 1998. The team under the direction of Grudens ended the first two seasons in 1998 and 1999 with an 8-8 record. In the 2000 season, the Raiders' most successful season of the decade, the team became division winners for the first time in ten years with a score of 12-4. Under Gruden's direction, the Raiders reached the AFC Championship Game in the play-offs , but lost 16: 3 to the eventual Super Bowl winner, the Baltimore Ravens . In the following season 2001 they were able to win the AFC Western Division for the second time in a row. However, this was followed by a defeat in the play-offs against the New England Patriots due to an extremely controversial decision ( tuck rule game ) by referee Walt Coleman. In 2002 the Raiders were again in a Super Bowl. In a one-sided game against the Tampa Bay Buccaneers they lost 21:48 to the team to which Jon Gruden had switched after the 2001 season. The Raiders could not recover from this clear defeat in Super Bowl XXXVII . The following eight seasons all ended with a negative balance. The 2006 season was particularly disappointing, when the Raiders only managed two wins in 16 games under their old and new head coach Art Shell . After this failure, Shell was fired and Lane Kiffin was introduced as the new head coach. Due to their poor performance, the Raiders received the first pick in the 2007 NFL Draft , with which they signed JaMarcus Russell as quarterback . However, Russell was released in 2009 due to disappointing performance. The team played better in the 2007 season and won four games. In the following draft they secured themselves with the fourth pick running back Darren McFadden .

In the 2011 season, the team under their new coach Hue Jackson was able to convince many critics at the beginning by starting the season with seven wins and only four defeats. However, the season was very turbulent for the team and the Raiders ended it with eight wins and eight losses.

The failure of starting quarterback Jason Campbell , on which high hopes for 2011 rested, was tragic for the team . Campbell was injured in the 6th game against the Cleveland Browns and was out for the rest of the season. The Raiders then secured Carson Palmer from the Cincinnati Bengals in exchange for future draft picks for the NFL Drafts in 2012 and 2013. Since it seemed too risky to send Palmer into the next game immediately, the Raiders then sent backup quarterback Kyle Boller as a starter next game against the Kansas City Chiefs . After a bad first half, in which Boller threw three interceptions, coach Hue Jackson sent Palmer into play. Palmer, who only knew 50% of the moves in the short time, threw three interceptions in the second half and the Raiders lost the game against the Chiefs with 0-28. Running back Darren McFadden started the season well and helped the team win their third game against the New York Jets with 171 yards of space to win 34-24. However, he injured himself in the game against the Chiefs and was also out for the rest of the season. The last game of the regular season should decide on participation in the play-offs. However, the team weakened by the failures lost against the San Diego Chargers with 26-38 and the AFC West rivals Denver Broncos (also 8-8) then moved into the play-offs as division winners.

The most moving event of the season, however, was the death of owner and general manager Al Davis at the age of 82. Due to many disputes and lawsuits, Davis was one of the most colorful and contentious figures in the National Football League. The first home game after the death of Al Davis was marked by many emotions and highlights. The Raiders won the game 24:17 against the Cleveland Browns and dedicated that game to Al Davis. Many greats in Raiders history and celebrities attended this game and a funeral ceremony was held for Al Davis. At halftime, they found themselves in a circle on the emblem in the center of the field, commemorating Davis. It was reserved for former coach John Madden to light a memorial torch on the plaza level of the stadium. Mark Davis, son of Al Davis, inherited his father's life's work and has been the new owner of the Raiders ever since. After the season, the new General Manager Reggie McKenzie , was poached by Mark Davis from the Green Bay Packers .

Raiders in the Pro Football Hall of Fame

The Pro Football Hall of Fame includes 14 players plus owner and AFL Commissioner Al Davis, Head Coach John Madden and official Ron Wolf, who spent their most important time with the Raiders. The Raiders have a total of 26 Hall of Famers. 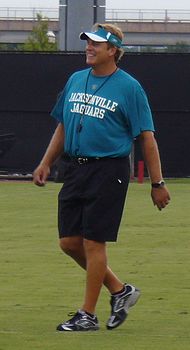