The title of this article is ambiguous. Further meanings are listed under Conference (disambiguation) .

The conferences are divisions of the teams in North American university and professional sports . A team called a franchise is assigned to a conference mainly according to geographical aspects, either in an Eastern Conference and a Western Conference , or in two conferences, which are based on the traditional division of formerly competing professional leagues. In almost all team sports in college and professional sports, the winners of the conferences compete against each other in an elimination mode known as playoffs or post-season in order to win the "world" or national champions (professional or university sports) in a final game or a final series. to investigate. A controversial exception is the Bowl Championship Series in college football , the college game operation of the National Collegiate Athletic Association (NCAA) in American football , which is not based on a playoff system.

The division of teams in the conferences is not fixed, but can change with the move of a team or the expansion of a league as well as with the dissolution or re-establishment of conferences.

In Major League Baseball , the structure is similar to American football, only the former competitors are still called League instead of Conference, as they play according to slightly different rules. There are three divisions with five franchises each in the National League and American League . As in football, these can overlap geographically. For example, New York, Chicago, and Los Angeles each have franchises in the East, Central, and West divisions of each league.

The divisions in the MLB:

The (from 2022) 29 teams of the highest professional soccer league in the USA and Canada, Major League Soccer , are divided into two conferences, West and East. There is no further subdivision, for example into divisions . In 2019, between March and October, each team played one game against the teams in the other conference and two against each team in their own conference.

Similar to the NHL, the basketball league National Basketball Association has been divided into an Eastern Conference and a Western Conference since the 1970/71 season . Previously there was only an Eastern and a Western Division (with the exception of an additional Central Division in the 1949/50 season ). Similar to ice hockey, the division is based on regional criteria. With currently 30 teams in the NBA, both conferences are assigned 15 teams each. Both conferences are in turn divided into three divisions of five teams each.

The divisions in the NBA:

The number and division of conferences in the university sports operations of the National Collegiate Athletic Association as well as the assignment of teams is characterized by frequent changes, which can also vary depending on the sport. In basketball, there are over 30 NCAA conferences in both the women’s and men’s division of the highest NCAA league , which roughly follow geographical conditions but often overlap with other conferences. A conference usually has around ten universities, but the number can vary according to conference and type of sport, so there can be twenty or forty members. A division is again a division of those conferences into mostly two parts, but also characterizes the three skill levels in a second meaning, including the rules of participation that apply to the university, such as the number of games, scholarships, home games or the required quality of the opponents.

The divisions in the NFL: 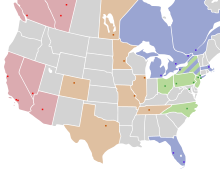 Following the example of the NHL, the Eurasian Continental Hockey League also formed two conferences from 2009.

The divisions in the NHL: