A player scores one try

An attempt (Engl. Try ) is the most common type, in the sports of rugby league and rugby union to score points. It is achieved by a player placing the ball in the opponent's in-goal or alternatively touching a goal post and the ground at the same time. The kicker must hold the ball in his hands when placing it on the ground.

An attempt is similar to a touchdown in American football and Canadian football , with the difference that the player must necessarily touch the ground with the ball. In both variants of rugby, however , the term “touchdown” stands for placing the ball in one's own in-goal in order to deprive the opponent of the opportunity to try. The term “grounding” is more common for this.

In both rugby league and rugby union, if a referee believes that an attempt has been prevented by misconduct by the defending team, he can grant the attacking team a penalty attempt. Penalty attempts are always granted under the goal post, regardless of where the violation occurred.

Since January 2005, a penalty attempt in rugby union has included at least one warning and thus a yellow card , or a dismissal. 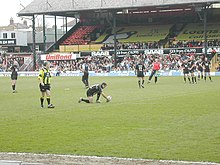 Prepare for a raise

If a team has made an attempt, it is given the chance to carry out a conversion in both rugby variants . The attempt is made to kick the ball between the two longitudinal bars and over the crossbar of the H-shaped goal and thus score additional points. The kick takes place parallel to the touchline from any point on the playing field that is level with the point where the attempt was made. In rugby union, the raise can take the form of a placed kick from the ground or a drop kick (the player drops the ball and kicks it after it ricochets off the ground). In rugby league, only placed kicks are allowed for a raise, in rugby 7 , only drop kicks are allowed.

To facilitate the subsequent raise, the attacking players try to put the ball as close to the center as possible. In both rugby union and rugby league, an increase is worth two points.

Development of the rule

The somewhat idiosyncratic term "attempt" comes from the early days of rugby. Due to the origin of the game from football , the increase had a higher priority than it is today. At the beginning it was the goal of the match, goals (goals) to achieve. An attempt was granted after the ball was dropped behind the goal post. There were no points for this, but the attacking team was able to try a kick on goal without being disturbed by the opposing team. Only when there was a tie did the number of attempts make the difference. From 1875 a goal could be balanced by three attempts.

In modern rugby and in all of its derived variants, players prefer to try and shoot at goal. The attempt now has a fixed point value, which has increased over time and exceeds that of the shot on goal. Nevertheless, it is important for every team to have a good kicker, as successfully raised raises often make all the difference.

The last change in 1992 was the upgrading of the attempt in rugby union to 5 points, so that an increased attempt (= 7) can no longer be compensated by two penalties (= 6).