The main building of Helsinki University on Senate Square . 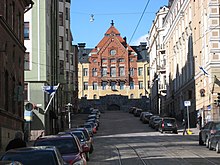 The Behavioral Science Faculty of the University of Helsinki.

The University of Helsinki is bilingual with the languages ​​Finnish and Swedish . Many events are also offered in English. The college has around 36,000 students and 7,600 employees. Around 4,200 degrees are recorded every year. The proportion of women among the students is 64%. The university is a member of the League of European Research Universities , the Utrecht Network and the Europaeum .

Studying at the university is free; at present, students only have to pay 80 euros per year to become a member of the student union . The study places are correspondingly popular: 1,400 applications are received from abroad alone every year. The acceptance rate is around 10%. The selection is based partly on the average Abitur grade and partly on the basis of entrance exams. The university also offers exchange places as part of the EU- funded Erasmus program .

At the university, as at the other universities, there are originally regionally structured student associations ( osakunnat ) , but their function and membership structure are more comparable to the German student councils than to student associations . There are also numerous subject-specific student organizations (e.g. the Umlaut ry student council for German studies students ).

The previous institution was founded in Turku on March 26, 1640 as the Royal Academy of Turku and organized on the European model. It consisted of the four classical faculties: the philosophical, theological, the law and the medical faculty. The students first had to complete a basic course at the philosophical faculty; after that they were allowed to transfer to the other faculties. On a European scale, the Turku Academy was relatively small: in the year it was founded, 250 students began their studies with 11 professors. When Russia came to power in 1809, the Swedish Royal Academy was renamed the Turku Imperial Academy . Tsar Alexander I doubled its budget and founded six new professorships. After a major fire, the academy was moved to the new capital Helsinki in 1828 at the instigation of the Russian rulers, now renamed The Imperial Alexander University in Finland .

The main building on Senatsplatz was built by Carl Ludwig Engel between 1828 and 1832 and expanded in 1936. In a Soviet air raid on Helsinki during the Continuing War , the building was badly damaged by bombs on February 27, 1944. To the north of the main building is the Finnish National Library, also planned by Engel and belonging to the university (not to be confused with the Helsinki University Library ). The National Library has the largest collection of Slavic works in the western world. It owns around 1.5 million volumes and 2000 manuscripts. The university has four campuses in Helsinki (Center, Kumpula, Viikki and Meilahti) and external facilities in 20 other locations in Finland.

However, the university did not move into today's main building, planned by Carl Ludvig Engel, until June 19, 1832. The university was directly under the control of the Tsar; neither the Finnish Senate nor the Governor General had any influence. Only after the February Revolution of 1917 did  the university become autonomous. It received its current name on February 18, 1919, after Finland gained independence. At that time the university had 56 professors and around 3000 students. During this time, the Åbo Akademi (1918) and the University of Turku (1920) were founded at the place of origin of today's Helsinki University, which is considered the legal successor to the Royal Academy of Turku - which gives the University of Helsinki its previous special position as the only university in Finland lost. 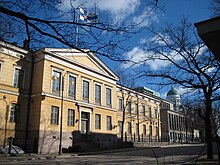 The Swedish School of Social Sciences is still affiliated, but with a special status.

As by far the largest university in the country and also the only university well into the 19th century, the University of Helsinki is the alma mater for the majority of Finns who have become famous in science and other areas of life. The fact that it is a comprehensive university also means that its researchers and alumni are relatively diverse. Already from the days of the Turku Academy, both natural scientists such as the astronomer Anders Johan Lexell (1740–1784) or the mineral chemist Johan Gadolin (1760–1852) and humanities scholars such as the historian Henrik Gabriel Porthan (1739–1804) could be named.

The University of Helsinki has always been in close contact with the cultural life of Finland. Many of the people who contributed to the great development of Finnish culture in the 19th century were associated with the University of Helsinki, for example Johan Vilhelm Snellman (1806–1881) who was professor of philosophy . The composer Jean Sibelius (1865–1957) was enrolled as a law student and the writer Frans Eemil Sillanpää (1888–1964), who received the Nobel Prize in Literature in 1939 , had studied science at the University of Helsinki. There are also many alumni of the University of Helsinki in other areas of life; currently well-known personalities include Linus Torvalds (* 1969), the initiator of the free Linux operating system ; Jorma Ollila (* 1950), under whose leadership Nokia became the largest mobile phone manufacturer in the world; as well as numerous politicians, including the former president of the country, Tarja Halonen (* 1943).

Other personalities can be found under the category: Person (University of Helsinki) .