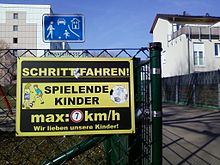 Visual communication (1st from French visuel ← via late Latin visualis , "belonging to seeing" (from Latin visus , "(the) seeing "); 2nd Latin communicatio , "communication"), i.e. communication mediated through Seeing is the opposite of verbal or direct physical ( tactile or olfactory ) communication . Many animals and also humans perceive most of the environmental information through the eye. However , such information only becomes “communication” when the perceived optical signals have been specifically sent out and when they are processed and interpreted in the brain. The perception of visual signals can happen unconsciously. Advertising also takes advantage of this.

With the increasing importance of electronic image carriers (television, computer, smartphone) for the everyday perception of people, “visual communication” has become a central concept in media theory.

Visual communication in the narrower sense related to art is a term that has been used since the end of the sixties first in art education for the field of fine art, through the inclusion of the visual worlds of pop culture and everyday culture , as well as through architecture and especially urbanism and the imagery of advertising was expanded, was used. Nowadays the term visual communication is therefore often used synonymously with communication design .

However, this area is only a sub-area of ​​visual communication. It was originally shaped by the neo-Marxist cultural criticism of the Frankfurt School - keyword consciousness industry . The advocates of visual communication rejected the bourgeois concept of art, according to which art derives its legitimation from itself and denies its economic and social conditions. The commodity character of art and the possibilities of manipulation by the mass media moved to the fore with the new term. Between the products of established art and those of the so-called culture industry , i. H. the mass media, a qualitative distinction was not made in the ideological criticism of visual communication, since both areas were regarded as repressive instruments of legitimation of rule . Initially, the only legitimate goal of visual communication that should be striven for was the reorganization of visual media for emancipatory enlightenment.

In the marketing industry, the term visual communication is also used as a generic term for all visually communicated information perceived with the eye. The most important example would be the posters , especially the advertising posters (in addition to image advertising). Marketing tries to make perception measurable with auxiliary instruments such as attention tracking , recognition procedures or recall procedures .

The visual communication courses at universities , art colleges or technical colleges today mostly include the areas of communication and graphic design and photography , but sometimes also film and media art and the visual arts . So far, these have usually been awarded the academic degrees of Diplom-Designer / -in or Dipl.-Designer / -in (FH) or diploma for visual communication . In the course of the Bologna reform , however, the academic degrees at the relevant universities will be adapted to the “Bachelor / Master of Arts” gradations.

Visual communication also describes the content-independent aspects of communication that takes place visually . This also means communication by means of sign language by deaf or severely hearing impaired people. Here, the voice signals are displayed with the hands and other body parts as well as by the execution of movements ( behaves ) and recorded visually. As with all other languages ​​or forms of communication, the form of the signals formed in this way must of course be subject to a consensus , a conventionalization, in order to enable the correct interpretation .

Similar to vocal communication , in visual communication, in addition to the formal content, personal feelings and changed meanings such as B. Transferring irony through accompanying facial expressions or particularly "emphasized" execution of gestures .

Visual communication between the USS Lake Champlain the US Navy and HMS Bayleaf the Royal Navy , 2002

In the military, orders were and are still partly transmitted by hand signals or flag signals . Before the invention and introduction of the radio, this was the only way to quickly and unambiguously issue orders to troops and ships over long distances and to receive feedback if necessary. However, this method has two major disadvantages: firstly, there must always be visual contact between the commander and the recipient; on the other hand, every viewer has the opportunity to read and decipher these characters as well - an enemy too.