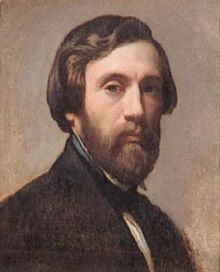 Charles Gleyre enjoyed an art education in Lyon and Paris, where he a. a. learned watercolor technique from Richard Parkes Bonington . He then went to Italy in 1828 , where he sought to penetrate the essence of the various schools and copied Giotto with the same care as Raphael and painted several historical genre pictures. From Italy he went in 1834 as a travel companion and draftsman for the industrialist John Lowell from Boston via southern Italy, Malta , Corfu and Turkey to the Orient and visited Egypt , Abyssinia and Syria . On his travels he drew sights, landscapes, costumes and folk scenes based on nature.

After he had to break off the trip to the Orient due to illness, he returned to Paris in 1838. Gleyre first appeared before the public in 1840 in the Paris Salon with the painting John on the island of Patmos . He achieved a resounding success in 1843 with the Le Soir (evening) , a motif from the Nile that depicts a poet who sees the personified dreams of his youth sailing away in a boat from the shore (also called Les illusions perdues - The lost illusions ).

From then on he found his own way by combining the power of expression and depth of feeling with poetic ideality. He painted religious, historical and mythological pictures, combining the latter with a romantic mood with the strict, stylish formal language of antiquity .