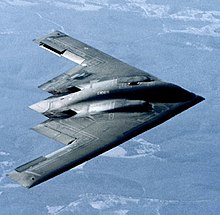 Stealth aircraft or stealth aircraft is the name of a military aircraft that uses stealth technology. This is done by means of a special geometric shape and the surface properties, so that the aircraft can only be detected by an enemy radar over short distances (30% of the normal radar range, for example with the F-117 Nighthawk in Soviet radar systems from before 1990).

Stealth planes only return a small amount of energy to the transmitter. The shape makes a significant contribution to the fact that fewer electromagnetic waves are reflected than in conventional aircraft. In addition, special radar absorbing materials (RAM) are used on the surface to reduce the radar cross-section . In slower aircraft, the exhaust jet of the engines is kept cool by special precautions, or its exit is covered at the bottom in order to offer infrared detectors the lowest possible infrared signature. In the first as a stealth bomber ( stealth English become known "stealth") types of F-117 Nighthawk , the characteristic angular shape ensures that incident radar waves are not reflected toward the signal source.

In addition, the use of composite materials instead of metal for tail units ensures a low radar signature.

The first stealth aircraft were developed and used in the United States . State of the art known model is the B-2 Spirit stealth bomber of the United States Air Force , which were purchased in 21 copies. Their use is planned until 2040. The US is currently working on the Northrop Grumman B-21 long-range bomber .

In the summer of 2007, Russia announced massive armament and modernization of its armed forces. Russia says it wants to outperform the US Air Force's stealth bombers. In August 2011, Russia presented the Sukhoi Su-57 multi- role fighter to the public for the first time. At the same time, Russia is developing the RSK MiG-LMFS multi-purpose fighter , which is said to have low stealth properties. The country is also developing the long-range Tupolev PAK-DA bomber .

China celebrated the first 'official' test flight of a stealth aircraft called the J-20 in January 2011 . The machine is similar to the Russian MiG 1.44 (which never went into production) and the US Air Force's Raptor aircraft . The US Secretary of Defense Robert Gates admitted that the project took US intelligence by surprise. In October 2012, a smaller model called the J-31 was introduced, which is very similar to the F-35 .

India is working on the HAL AMCA , a stealth multipurpose aircraft. At the same time, they worked with Russia on the development of the Suchoi / HAL FGFA , but the cooperation was discontinued in 2018.

Sweden is currently developing the Flygsystem 2020 in order to be able to offer a stealth aircraft for its own air force and the export market by 2020. In addition, the aircraft is to replace the conventional Saab 39 . The Swedish company Saab is working with Turkey , which is developing the multi-purpose aircraft TAI TFX .

In South Korea want KF-X will be put into service the 2,020th Japan develops the Mitsubishi ATD-X , an aircraft for research into stealth technology.

Special features of the stealth aircraft