A series of seismic activities began to emerge on September 16, 1957 on the Azores island of Faial an impending volcanic eruption . The eruption finally took place on September 27, 1957, about 1 km from the western tip of the island, in the open sea. The newly formed volcanic island united with the main island of Faial on November 12, 1957, the activity of the volcano ended on October 24, 1958.

The approximately 2.4 km² large peninsula that was created by the volcanic eruption was baptized Ponta dos Capelinhos . 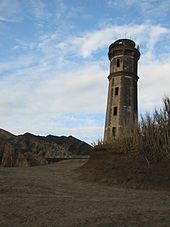 Lighthouse at the Ponta dos Capelinhos

The effects of the outbreak were devastating. Ash was thrown over 1000 m high into the air, there were huge explosions and numerous earthquakes , around 300 houses were completely destroyed.

Around 2,000 people had to be resettled, and many of the island's residents finally decided to emigrate to the USA , which, through a special law, waived a green card and thus made it possible for those affected by the disaster to immigrate.

Capelinhos is at the end of a series of volcanoes, including the Caldeira with the Cabeço Gordo , the highest point in Faial.

The landmark of the Ponta dos Capelinhos is the partially destroyed lighthouse that stands on the steep cliffs of Capelo.

Around half of the land mass of the Capelinhos, which consists mainly of volcanic ash , has now sunk back into the sea.