This article deals with the aviation pioneer August Euler.

August Euler (* 20th November 1868 in Oelde ; † 1. July 1957 in Feldberg (Schwarzwald) ; born August Heinrichsreith ) was a German engineer and manager who was the first owner of a "aircraft license" and aviation pioneer became famous for and after First World War headed the Reich Air Office and the Reich Office for Aviation and Motor Vehicles at the Reich Ministry of Transport for a few years .

August Euler was the son of August Reith and Karla Euler. Hans Georg Euler (born 1573 in Lindau , since 1594 a citizen of Basel ) belongs to the ancestors on his mother's side, whose descendants also include the important mathematician Leonhard Euler , the chemist Hans Karl August Simon von Euler-Chelpin and the physiologist Ulf von Euler .

August Euler is the grandfather of:

August Euler was also the godfather of Karl Ernst August Heinkel, the son of Ernst Heinkel .

In 1901 he changed his surname to Euler to emphasize his maternal descent from Leonhard Euler.

August Euler studied at the Technical University of Aachen and then initially worked as a “technical businessman”, “foreign traveler” and automobile designer. Eventually he became a board member of a Frankfurt rubber goods factory, where his main focus was on pneumatic tires for motorized vehicles and where he probably also experienced the beginnings of aircraft construction. 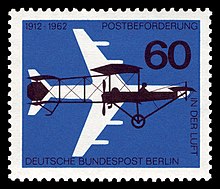 Special postage stamp of the Deutsche Bundespost Berlin from 1961 : Euler's “Gelber Hund” from 1912 in front of a four-engine jet plane

Bust of August Euler in the Peter Behrens School

In October 1908, Euler (at the same time as Edmund Rumpler ) founded Euler-Flugmaschinenwerke as the first German factory for powered aircraft in Griesheim . For this he acquired the French manufacturer Voisin the license for the reproduction of the Voisin Standard - biplane . He leased a small part of the firing range at the Griesheim military training area in the so-called Griesheimer Sand and created Germany's first motorized airfield there in early 1909 . The more famous Berlin airfield Johannisthal was only opened in September 1909, it was the first airfield run as an independent company . The flight attempts in Griesheim were first started from a sand dune on the site, which was nicknamed "Chimborazo".

In 1910 Euler graduated from the first officially required, internationally valid pilot's test in Germany. On February 1st he received the pilot's license "Germany No. 1".

In 1912, Euler relocated his factory with a flight school and workshops near the Niederrad district of Frankfurt . In the same year he built the Yellow Dog as a mail plane.

In 1912, at his suggestion, the national flight donation was set up. On June 10, 1912, on his initiative, the first official mail flight between Frankfurt am Main and Darmstadt came about.

From 1910 to 1918 Euler trained 75 pilots in Griesheim and Frankfurt am Main. These were mainly officers and nobles, such as Prince Heinrich of Prussia .

During the First World War , the Euler Flugmaschinenwerke carried out the construction and repair of aircraft under license, but also tried their own developments with little success. 420 aircraft were produced by the end of the war.

After World War Euler was at the suggestion of Wilhelm Siegert the rank of Under Secretary of State head of the newly founded Reich Air Office , whose skills soon became the National Board of Aviation and Automotive Engineering have been extended. Euler took a position critical of the military and campaigned heavily for civil aviation. He brought about the approval of the first air transport companies in Germany and drafted the first air traffic regulations. He also advocated the internationalization of air traffic. In his memorandum on the goals and needs of German aviation in international relations , which was created for the Spa conference , he affirmed this position. As a result, he came into conflict with other, militarily oriented officials in his office, including Willy Fisch . In November 1920, a few months after his office was integrated into the Reich Ministry of Transport , Euler initially took a leave of absence and a short time later he finally retired.

August Euler died on July 1, 1957. He was buried in a grave of honor in the main cemetery in Frankfurt am Main.

In 1976 the August-Euler-Weg in Karlsruhe was named after him.

The Bundeswehr named an Airbus A310 MRT MedEvac in his honor . There is also the August Euler Aviation Prize from the Technical University of Darmstadt . His grave is in the Frankfurt main cemetery .

At the Griesheimer Sand airfield, which has been de-dedicated since 1992 , an aviation museum is being set up with the support of the Technical University of Darmstadt with a focus on “August Euler”.

The aforementioned landing site is also called the August-Euler-Flugplatz .

There is August-Euler-Strasse in Pulheim and August-Heinrich-Euler-Strasse at Berlin Brandenburg Airport . In Oelde, the birthplace of August Euler, a street has also been named after him.

Euler's grave in the main cemetery in Frankfurt am Main