This article is about the actor Christopher Lambert. For other people with a similar name, see Christophe Lambert .

Christopher Lambert in 2009 at the 66th Venice Film Festival

Lambert's father, a French financial expert, worked for the United Nations in New York for some time . Lambert spent the first two years of his life in Great Neck, New York State , then his parents moved to Geneva , where he also went to school.

When he was twelve, Lambert played his first role in the school theater. Although he wanted to become an actor, for the sake of his parents he first began training on the London Stock Exchange. After only six months, however, he gave up the job and, under pressure from his father, did French military service. After his father had agreed to support him for two years, he began to study acting at the Paris Conservatory. 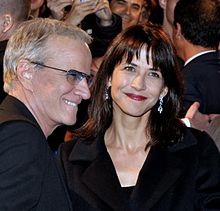 Lambert starred in various French films under the name Christophe Lambert before he received the title role of John Clayton in the Hollywood production Greystoke - The Legend of Tarzan, Lord of the Apes in 1984 from the director Hugh Hudson . For his role in Luc Besson's film Subway , Lambert was awarded the César for best actor in 1985.

Lambert's breakthrough came in 1986 with the cult film Highlander - There can only be one . For the role of the immortal Connor MacLeod he trained sword fighting for 16 weeks . Since the very short-sighted Lambert cannot wear contact lenses, additional training hours had to be scheduled so that the filming went as accident-free as possible. Lambert also played the role in three sequels to the film.

This was followed by other successful films such as Der Sizilianer (1987) and Der Priestermord (1988) as well as the thriller Knight Moves - A Murderous Game in 1992. In 2009, he shot the two-part TV series The Secret in New Zealand for ZDF alongside Mario Adorf and Veronica Ferres der Whale , a film that addresses the noise pollution of the world's oceans and its consequences for marine fauna.

After the death of Ulrich Gressieker , Lambert's first German dubbing voice (Highlander) , he was mainly dubbed by Thomas Danneberg and Joachim Tennstedt .

In addition to acting, Lambert runs a winery together with sommelier Eric Beaumard, where he produces his own wine under the label Les Garrigues de Beaumard-Lambert . He is also co-owner of the Gitana restaurant in Buenos Aires .