"La Maravilla Negra" (German: The Black Miracle ) was one of the first world stars - and the first black - of international football. Andrade is considered the best footballer of the 1920s, and according to some sources even the first half of the 20th century. He won the Olympic Games with Uruguay in 1924 and 1928 and the first soccer world championship in 1930 .

In 1901 Andrade was born as a descendant of black slaves in Salto in the poor north-west of Uruguay. As a teenager he moved to his aunt in the capital Montevideo , where he worked as a street musician, shoe shiner and newspaper seller. He led the dance group The Poor Cuban Neges , was considered a master of the national candombe dance , a form of tango , and was rarely seen without his drum. People also called the colored boy King of Carnival .

In addition to his passion for music, Andrade was an avid soccer player. At the beginning of his career he played for the Club Atlético Peñarol until 1920 . From there his way led via Miramar Misiones to Club Atlético Bella Vista . In 1922 he signed a contract there. In 1925 he moved to Nacional Montevideo , one of the largest clubs in the country. Championships were denied to him.

In the 2-3-5 system at that time (2 defenders, 3 runners, 5 strikers) he took on the role of "right runner" that is now called the midfield director . He directed and choreographed the game like a ballet . Exceptionally agile, he played almost disembodied. Andrade is said to have invented the scissor strike , he mastered overhead kicks and diving headers perfectly.

In 1932 the Uruguayan league was converted into a professional league. Andrade returned to local rivals Peñarol Montevideo in 1931 , for whom he played until 1932, according to Luciano Álvarez . According to other sources, he is said to have finally celebrated his first and only national championship with the Aurinegros in 1935 . He then played in Argentina for a short time before ending his career in 1937.

Career in the national team 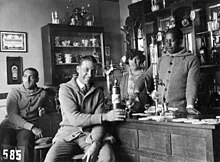 The exceptional talent was soon called to the Uruguayan national team ("Celeste") and made his first international match on June 23, 1923 in a 0-0 draw against Argentina . In the same year he won his first title with the "Celeste" at the Copa America .

In 1924 Andrade went to Europe with the Uruguayan team to take part in the Olympic Games in Paris . Until now, many Europeans had never seen a black man, let alone playing football. Andrade was the only black in the tournament, which alone caused a stir. In the first game, the then best team in Europe, Yugoslavia , was disenchanted 7-0. The South Americans won the gold medal after five games with 20-2 goals and were clearly superior to the European competition in terms of running, tactics and technology. Among other things, Andrade managed the first known solo motor when he played seven opponents over 75 meters against France and hit his shot into the goal. A German football correspondent wrote at the time in the best colonial German: “A real Negro named Andrade represented the runners with an exotic note with his color. But the man can do more. A more purposeful, tactically perfect game can hardly be imagined. His fabulous ability prompted spontaneous applause. Long Andrade stands out for his preferred header game. The negroes seem to have skulls like coconuts. ”Uruguay was an Olympic champion - Andrade a star.

After this victory and winning the gold medal, Andrade stayed in Paris for a few months, lived there and enjoyed the "golden twenties" . He danced and singed through nightclubs, bars and cafes on the Seine a year before Josephine Baker celebrated incredible success in the city. That he was black didn't matter. Wealthy families made it important to bring him into the house as a piano tuner . Back in South America, Uruguay also won the Copa America in 1924 , but Andrade was not used.

Another victory in the South American Championship followed in 1926 . Andrade played so big here that he was voted the best player of the tournament.

At the Olympic Games in Amsterdam in 1928 , Uruguay won the gold medal again. Andrade had initially refused to travel, so Eduardo Martínez was nominated in his place . Shortly before the ship cast off, however, Andrade changed his mind and went to Europe. After two dramatic finals against neighboring Argentina, they became double Olympic champions there. Andrade was unable to play in the finals as he sustained an eye injury in the semi-finals against Italy when he hit the goal post. Nevertheless, Uruguay was considered the best national team in the world and Andrade was the star of the team.

The successes at the games also ensured that Uruguay was allowed to host the first football World Cup in 1930 . Here the "Celeste" reached the final again. In Montevideo they met Argentina again: Andrade did not score a goal, but directed his team and led them to the world championship title. The World Cup final on July 30, 1930 was supposed to be Andrade's last international match, after which he announced his resignation.

Overall, Andrade completed from his debut on June 24, 1923 to his last use on July 30, 1930 34 internationals for the Uruguayan selection. In doing so, he scored a hit.

Andrade loved the success, the show, and the fame. After his active career, he went back to Paris . Here he led a dissolute life and celebrated parties. His private life suffered from his antics and two marriages broke up. When finances became tight, he first sold his medals, then later everything he owned, and wandered the streets of Paris as a penniless beggar.

The German journalist Fritz Hack found the football star, forgotten by his compatriots, in the fall of 1956, a year before his death, after a six-day search in a poor house in Montevideo. Andrade, blinded on one side by an eye injury at the 1928 Olympics, was addicted to alcoholism and could no longer answer the journalist's questions. The answers were given by the sister of a former Olympic champion.

"His life almost seems as if the concept of the cliché was invented for it: Poor negro from the harbor district becomes famous all over the world, comes back celebrated, falls into drunkenness and poverty and dies in the poor house without a centavo", is the title of Andrade in Dieter Reiber's reference book Football of the Century in the Football Century .

Many chroniclers believe that Andrade would have become a megastar and rich had he been born 40 years later. But as the Frankfurter Allgemeine Zeitung wrote, he remains "a forgotten figure from the distant football days, of whose art only a few blurred still images and a few enthusiastic descriptions remain."

Andrade was the first "black pearl" of international football, according to the World Association of Football Historians and Statisticians ( IFFHS ) "the world's best player of the first half of the 20th century". However, opinions differ on this. The French newspaper L'Equipe gave his national team colleague Héctor Scarone this award in such a ranking .

At the 1950 World Cup , his nephew Víctor Rodríguez Andrade followed in his uncle's footsteps and brought the World Cup title to Uruguay for the second time.