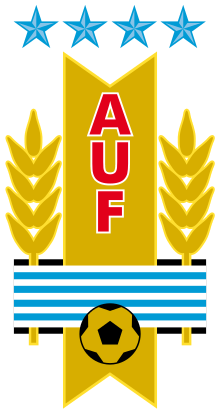 In Uruguay , as in almost all of Latin America, football isthe most important sport of all. A great many young people play soccer, and professional players can become national heroes.

The national football association is the Asociación Uruguaya de Fútbol (founded in 1900 , member of CONMEBOL since 1916 - founding member). There are around 1,100 clubs and 188,000 active members in the association (as of 1999). In 1954, the Mundo Deportivo newspaper estimated the number of football clubs in Uruguay at around 3,000, with around 125,000 footballers playing at that time. However, at that time only 17,000 players were organized in the AUF, including around 900 professional footballers.

The first official football game on Uruguayan soil was played by the Montevideo Rowing Club and Montevideo Cricket Club in 1881 . However, the two teams did not belong to pure football clubs; rather, both institutions were sports clubs in which several sports were practiced. The first pure football club was founded on June 1, 1891 with the Albion Football Club .

Between 1900 and 1930 the league was an amateur competition. The professional league was founded in 1931.

Since 1994 the preliminary round ( Torneo Apertura ) and the second round ( Torneo Clausura ) have been held separately. The respective top of the table determined the champions in home and away games at the end of the season. Since the 2005/06 season, the championship title has only been determined through an additional play-off with the club that is highest in the combined table of Apertura and Clausura .

In the first half of 2005 an "off-season" was played because the game year was then adjusted to the European rhythm. The Apertura has since taken place in the second half of the year, the Clausura will follow in the first half of next year.

The two dominant clubs are Club Atlético Peñarol and Nacional Montevideo , which have by far the most championship titles. Another club was champion only 18 times.

Championship title in the amateur league

Teams with the most titles

Championship title in the professional league

Teams with the most titles

Teams with the most titles in amateur and professional leagues overall