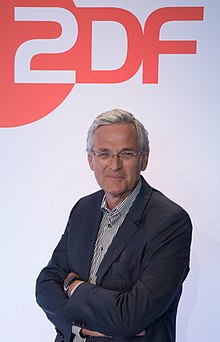 Peter Frey (born August 4, 1957 in Bingen ) is a German journalist and television presenter . He has been editor-in-chief of ZDF since April 1, 2010 .

After graduating from the Stefan-George-Gymnasium in Bingen in 1976, Frey did community service and from 1978 studied political science , education and Spanish at the Johannes Gutenberg University in Mainz and, as a scholarship holder of the Spanish Foreign Ministry, in Madrid . He received his doctorate in 1986 in Mainz on the subject of Spain and Europe: The Spanish Intellectuals and European Integration .

During his studies he already worked as a moderator in the radio program of Südwestfunk and wrote for the Frankfurter Rundschau and Die Zeit . In 1983 he became an editor at ZDF and reported for heute-journal from Nicaragua , Mexico , Poland and Spain . From 1988 he was the personal advisor to the then newly elected ZDF editor-in-chief Klaus Bresser, among other things, responsible for the interview series Was nun, ...?

In 1991 Frey went to Washington as a correspondent and deputy head of the local ZDF studio , from where he reported on the Gulf War . From 1992 to 1998 he headed the ZDF morning magazine and moderated the program together with Maybrit Illner , Gundula Gause and Cherno Jobatey .

From 1998 to 2001 he was head of ZDF's main foreign policy department. During this time he moderated the international journal , numerous special programs and the program ZDF Royal . He developed the daily ZDF-Europa-Journal heute - in Europa and acted as the author of the foreign reports Who will save Russia? and the curse of oil in appearance.

Peter Frey (right) in an interview with the chargé d'affaires of the US Embassy John M. Koenig (left) and former Ambassador John Kornblum (center), 2008

From 2001 to 2010 Frey was head of the ZDF capital studio in Berlin and moderated the programs Berlin direkt , ZDF summer interview and Berliner Runde . He analyzed current political developments for the ZDF news broadcasts heute und heute-journal .

In 2005 he moderated numerous ZDF specials on the death of Pope John Paul II and the election of Pope Benedict XVI. from Rome. In 2008 he hosted the nine-hour ZDF program America has voted for Barack Obama and commented on the American President's visits to Germany.

On December 10, 2009, he was elected by the ZDF board of directors to succeed Nikolaus Brender as the new ZDF editor-in-chief from April 1, 2010. His successor as head of the ZDF capital studio was Bettina Schausten .

As editor-in-chief he introduced the new series ZDFzoom and ZDFzeit , and was committed to the development of the ZDF digital channel ZDFinfo and the station's online strategy. As a commentator in heute-journal and moderator of the interview series Was nun, ...? he is still present on the screen. Since Peter Frey's election as ZDF editor-in-chief, a. a. Shakuntala Banerjee , Sophhie Burkhardt, Benjamin Daniel, Frederic Huwendiek and Miriam Steimer as program speakers for him.

Peter Frey does not belong to any political party. In journalistic circles he, like his predecessor Brender, is considered to be close to the SPD .

As an author , speaker and panelist, Peter Frey has commented on the topics of international relations, European integration, German domestic politics, German culture of remembrance and professional ethical questions in journalism and the development prospects of television.

He has expressed his positions on questions of credibility in journalism on many podiums and a. represented in articles for " Die Zeit ", the " Süddeutsche Zeitung " and the " Frankfurter Allgemeine Zeitung ".

Memberships in associations, other engagement

Peter Frey is married and has one daughter. He's a Roman Catholic .