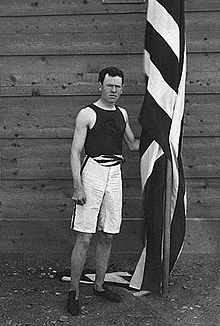 Connolly came from a poor Irish-American family in South Boston, Massachusetts . He graduated from Harvard University . Since the exemption was not granted by the University him to participate in the Games, exmatrikulierte it yourself. 1949, at the age of 83 years, however, he received from his university, the honorary doctorate .

In 1909 Connolly survived the collision of the ocean liner RMS Republic with the Italian ship Florida off the island of Nantucket .

He later became a widely read author of seafaring stories under the name James B. Connolly. The Connolly street in Munich's Olympic Village is named after him. Since 1908 he was a member of the American Academy of Arts and Letters .

Results / placements at the Olympic Games