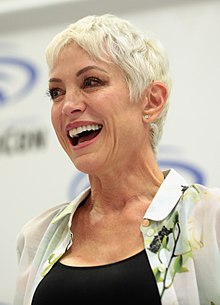 Nana Visitor is the youngest daughter of the choreographer Robert Tucker and the ballet teacher Nenette Charisse ; the American actress Cyd Charisse was her aunt. Visitor has a sister and two brothers. At the age of seven she started learning ballet in her mother's studio. After high school, where she got her first stage experience, she auditioned for a role on a Broadway show.

She uses the stage name Visitor because she wanted a more colorful name and didn't feel particularly attached to the name Tucker , which her father got when he was adopted. Visitor comes from the maternal side of her family.

On Broadway, Visitor played in the plays The Gentle People , Gypsy by Angela Lansbury and My One and Only , and later in Los Angeles in a new edition on 42nd Street . Visitor made her film debut in Witches' Sabbath (The Sentinel) with Ava Gardner . This was followed by a longer role in the daily soap Ryan's Hope and other appearances in various television series . In 1990, Visitor starred in the short-lived sitcom Working Girl as Bryn Newhouse in all twelve episodes alongside Sandra Bullock , who was still unknown at the time , and the series was based on the film Die Waffen der Frauen

In 1993, Visitor got the role of Kira Nerys in Star Trek: Deep Space Nine (DS9) . In 2001, after the end of DS9 , played in the Visitor with a Tony Award winning Broadway play Chicago the Roxie Hart and in six episodes of the television series Dark Angel , the Madame X aka Dr. Elizabeth Renfro . In the series Wildfire she played from 2005 to 2008 as Jean Ritter one of the main characters.

She has a son with her first husband, Nick Miscusi , with whom she was married from 1989 to 1994. In 1997, Visitor married her colleague from the series, Alexander Siddig ( Dr. Julian Bashir , DS9), with whom they also have a son. The two divorced in April 2001. On April 2, 2003, she married production assistant Matthew Rimmer.

The asteroid (26733) nanavisitor , discovered in 2001 , was named after her by its discoverer William Kwong Yu Yeung , who has already discovered asteroids several times.