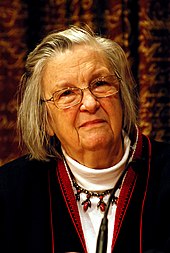 Elinor Ostrom (born August 7, 1933 in Los Angeles as Elinor Claire Awan , † June 12, 2012 in Bloomington , Indiana ) was an American professor of political science at Indiana University in Bloomington. She and her husband Vincent Ostrom are among the founders of the Bloomington School .

In 2009 she was the first woman to be awarded the Alfred Nobel Memorial Prize for Economics , along with Oliver E. Williamson . Ostrom has shown "how common property of user organizations can be successfully managed," said the award from the Royal Swedish Academy of Sciences .

Elinor Ostrom studied political science at the University of California, Los Angeles (UCLA) and completed her studies there in 1965 with a PhD after completing a Bachelor of Arts (BA, 1954) and Master of Arts (MA, 1962) . In her doctoral thesis Public Entrepreneurship: A Case Study in Ground Water Basin Management , she analyzed strategies that public companies were using to solve the problem of saltwater contamination of groundwater in Los Angeles.

In 1973 she and her husband Vincent Ostrom founded the Workshop in Political Theory and Policy Analysis at Indiana University in Bloomington , which is regarded as one of the world's most important centers for commons studies . In 2006 she founded the Center for the Study of Institutional Diversity (CSID) at Arizona State University as a sister institute of the workshop. International collaborations exist primarily with the Center for Interdisciplinary Research (ZiF) in Bielefeld and the Agricultural and Horticultural Faculty of the Humboldt University in Berlin , Germany , as well as with the Beijer Institute of Ecological Economics in Stockholm , Sweden .

Ostrom was recognized worldwide as a leading researcher in the field of environmental economics . She dealt with the question of how people can interact sustainably in and with ecosystems . In terms of content, she dealt with a. with the fishing industry, with irrigation systems, with forest and pasture management, in later work also with knowledge and the problem of intellectual property .

Ostrom's research dealt with the question of how people organize themselves in order to solve complex problems collectively. She analyzed how institutional rules affect the actions of individuals who are exposed to certain incentives, who (have to) make decisions, and also influence one another, and she showed workable, equitable and efficient solutions to these problems.

She became internationally known above all with her book Governing the Commons: The Evolution of Institutions for Collective Action (1990), in which she deals with problems of collective action in relation to scarce natural resources that are used collectively ( commons ). She came to the conclusion that for an appropriate and sustainable management of local commons resources in many cases an institutionalized local cooperation of those affected is superior to both state control and privatization .

In an institutional economic approach, she highlighted two separate problems, on the one hand the use and on the other hand the provision of resources (problem of appropriation and provision ). Based on the analysis of numerous individual cases around the world, such as regional forms of management for high mountain pastures in Switzerland and Japan as well as irrigation systems in Spain and the Philippines, she shows successful and failed examples of the sustainable management of local commons resources in self-organization . Based on this empirical research, she developed the so-called design principles , which enable the successful management of common pool resources .

In her main work, Governing the Commons: The Evolution of Institutions for Collective Action , eight design principles are listed. The book was published in German in 1999 with the title The Constitution of the Commons: Beyond Market and State . The eight design principles were updated a few years later, based on which the following transfer is based:

She also pointed out the importance of nested institutions: if a common resource is closely linked to a comprehensive socio-ecological system, then the rules are organized on many nested levels and not hierarchically.

With this book, Ostrom has succeeded in illustrating the complexity of satisfactory solutions to local resource problems and the inadequacy of simple recipes. What is shown without a doubt is that there are problems of common resources that could be solved even without the privatization of these resources and even without a solution ordered by the central government from above.