Raymond Daniel "Ray" Manzarek (actually Raymond Manczarek ; born February 12, 1939 in Chicago , Illinois , USA ; † May 20, 2013 in Rosenheim , Germany ) was an American musician and writer . He became known as the organist of the rock group The Doors .

Manzarek was born in Chicago in 1939 to a Polish immigrant family who had lived in the United States for two generations. He started early on with classical piano lessons - probably more in the context of a middle-class upbringing - and his talent slowly developed.

After graduating from college in 1960, Manzarek decided to study at the University of California at Los Angeles , where he met Jim Morrison . The aspiring intellectuals quickly became friends, and Morrison even lived in the same apartment for some time with Ray and his girlfriend Dorothy. During this time Manzarek had his first extensive drug experience: He mainly consumed marijuana , but also the emerging LSD .

After Morrison's death and the breakup of the band, Ray Manzarek also tried to realize himself as a solo artist, but was not very successful. The album The Golden Scarab (1974), his collaboration with Nite City or the electronic adaptation of Carmina Burana (1983) could be mentioned, for example .

In 2002 Manzarek formed the band The Doors of the 21st Century with Robby Krieger , Ty Dennis and the front man of The Cult , Ian Astbury , which broke up after another legal battle with John Densmore and the parents of Jim Morrison in 2005 Called Riders on the Storm . Most recently Manzarek and Krieger appeared as Ray Manzarek and Robby Krieger of The Doors .

Because of a bile duct carcinoma , Manzarek was treated by Friedrich Douwes in the St. Georg Clinic in Bad Aibling . In view of his poor condition, he was transferred to a clinic in Rosenheim , where he died at the age of 74 as a result of his illness. 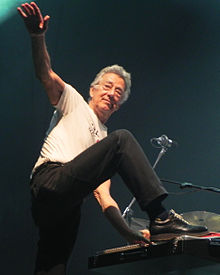 Publications with the Doors

Publications with Riders on the Storm