The 22 Euro Vision Song Contest took place on May 7, 1977 London district Wembley instead. As in the previous year , France and Great Britain were at the top, but with swapped places. This time the gap was 15 points. Originally the competition was supposed to take place five weeks earlier, but had to be postponed due to a strike by the BBC cameramen .

Artist of the winning title, Marie Myriam , in 2007

For the first time an African country, namely Tunisia , should take part in the contest; it was already drawn at starting position 4, but withdrew for a short time (because Israel participated) and made no further attempt to participate afterwards.

A rule change said that all contributions must be made in the respective national language. However, this was announced at relatively short notice; At this point in time, the songs of Germany and Belgium, each in English, had already been selected and were therefore given a special permit.

The German contribution was selected internally without a public preliminary decision. After the poor performance in the two previous years, the entertainment directors of the ARD broadcasters decided in 1976 to send the then well-known pop group Silver Convention to the Eurovision Song Contest in London . Singers Linda Übelherr , Penny McLean and Ramona Wulf insisted on singing their title in English and were supported by producers Sylvester Levay and Michael Kunze . At the end of 1976 Linda Übelherr left the group and was replaced by Rhonda Heath . Three songs were submitted, of which the title Telegram was selected by the ARD entertainment directors as the German contribution. The title was revealed to the public on March 9, 1977 on How would you like it? presented with Hans Joachim Kulenkampff . Silver Convention took 8th place at the Eurovision Song Contest in London with 55 points. Telegram was Silver Convention's final top 30 listing. 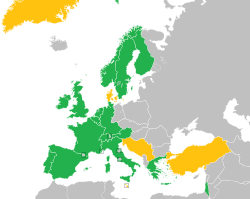 Sweden returned, but Yugoslavia did not take part, so that again 18 countries competed this year. Tunisia had already agreed, but withdrew at short notice.

The voting procedure that had been introduced in 1975 was used. In each country there was an eleven-member jury, which initially determined the ten best songs internally. Then the individual jurors awarded 12, 10, 8, 7, 6, 5, 4, 3, 2 and 1 points to these ten best songs.

1 Belgium and Germany's exemption contributions in English, see introduction
a. with English title

* The table is arranged vertically according to the order of appearance, horizontally according to the chronological scoring.
The scoreboard had indicated some errors during the live show. Two errors remained uncorrected until the end of the show and were only corrected afterwards. The Greek jury gave two 4 points to Spain and Austria (in addition to three for Finland, two for the Netherlands and one for the United Kingdom). This has been corrected to four points for Spain, three for Austria, two for Finland, one for the Netherlands and none for the United Kingdom. The French jury awarded three points to Greece and Israel (in addition to two points for Germany), and one point to Austria and Belgium. This has been corrected to three points for Greece, two for Israel, one for Germany and none for Austria and Belgium.