The 39th Eurovision Song Contest took place on April 30, 1994 at the Point Theater in Dublin . To date, it is the last competition that was not held in May. Ireland won for the third year in a row with Rock 'n' Roll Kids.

For Germany, the group Mekado took part with the title We give 'ne Party , which landed in 3rd place. Petra Frey took 17th place to Austria with For Peace in the World , Duilio and Sto pregando took 20th place for Switzerland. Switzerland had to sit out the following year and was missing for the first time in the history of the ESC.

A number of new countries came from Eastern Europe this year. Edyta Górniak from Poland immediately caused a sensation - To never yes! came in second place. Hungary also achieved its best result - Kinek mondjam el vétkeimet? von Friderika Bayer got the highest number of points in the first three ratings, from Sweden, Finland and Ireland. In the end, however, she was only fourth. Russia also landed in the first half. In contrast, Slovakia, Romania, Estonia and Lithuania performed relatively poorly at their premiere. Lithuania did not even receive any points. All of these countries had to suspend the following year.

In the end, made the song Rock 'n' Roll Kids , which Paul Harrington and Charlie McGettigan reciting the race. It was also the first entry to win the competition without accompanying orchestral music, and in the evening it was the only entry without orchestral music. Ireland won for the third time in a row and for the sixth time. This made Ireland the sole record winner of the ESC. By far the most successful performance of the evening, however, was the Riverdance , which was first performed during the break .

Places 1 to 18 meant qualification for the next year; this meant that Switzerland, Finland and the Netherlands along with some of the Eastern European newcomers in 1995 were not eligible. 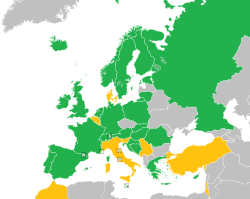 After the Eastern European countries joined the EBU, a new rule was introduced to limit the number of participants to 25. Places 1 to 19 from the previous year qualified for participation this year. Belgium, Denmark, Israel, Slovenia, Luxembourg and Turkey had to take a compulsory break this year. Italy voluntarily decided not to participate. On the other hand, Estonia , Romania , Slovakia and Hungary , which failed in the Eastern European preliminary decision last year, were allowed to compete in the Eurovision Song Contest this time. In addition, Lithuania , Poland and Russia were added, so that a total of 25 countries took part, which was a new record for participants.

The following performers returned to the competition:

In each country there was a jury that initially determined the ten best songs internally. Then the individual juries awarded 12, 10, 8, 7, 6, 5, 4, 3, 2 points and 1 point to these ten best songs. For the first time in the history of the competition, the points were announced via satellite so that the points speakers could also be seen on the screen.

1 English is the official language of Malta alongside Maltese, which is why Malta was able to compete with English-language songs when songs in their own national language were required.
a. in a few words in English

The countries in places 1 to 18 are admitted to the Eurovision Song Contest 1995 .