The 42nd Eurovision Song Contest took place on May 3, 1997 at the Point Theater in Dublin . For Germany , the singer Bianca Shomburg took part with the title Zeit , who landed in 18th place tied with Goodbye from Bosnia and Herzegovina . Even Austria and Switzerland performed poorly: One Step from BETTINA SORIAT was ranked 21, Dentro di me by Barbara Berta at No. 22, tied with the Netherlands .

From this competition onwards, the participating countries had the option of doing without the orchestra and singing live to the playback . Only Germany, Ireland, Austria and Croatia used this new option. Already in 1999 , the orchestra has been completely abolished.

The winner for the United Kingdom was the group Katrina and the Waves , which had hits back in the eighties. Of the members, however, basically only lead singer Katrina Leskanich remained . Love Shine a Light received points from all countries, for example the highest rating from Austria and Switzerland. In Germany there were only 10 points for the British, the highest ranking went to what is now a classic German point favorite: Turkey , with Dinle from Şebnem Paker & the Etnik group, came third.

This year the Barbara Dex Award , initiated by a fan site, was presented for the first time. The “worst” outfit of the competition is to be awarded with this price, which should not be taken very seriously. The first winner of this new award was Debbie Scerri from Malta .

For the second time since 1983, two participating countries, Norway and Portugal , scored no points at all. This only happened again in 2015 .

After this Eurovision Song Contest, Italy decided to stay away from the event until further notice and did not return until 2011.

Israel, Romania and Macedonia waived their participation, even though all of the eliminated countries would actually have qualified for the next competition. Israel did not take part because the day of the event was Yom HaSho'a . Additionally, failure in the qualifying round in 1996 was one reason all three countries were suspended. In order to ensure the long-term participation of the large donors ( Spain , Great Britain , France and Germany) and thus the survival of the contest, these countries were given Big-4 status. These countries were therefore always directly qualified for the finals, regardless of their position in the previous year.

After the massive criticism last year, the qualification mode was changed. The average number of points for the last four (five for the competitions after 1997) years was calculated for each country. The countries with the lowest score had to pause for a year, but qualified directly the following year. Denmark , Germany, Italy, Hungary and Russia were there again. Belgium , Finland and Slovakia were forced to take a break.

The following performers returned to the competition, two of them took part in 1996:

There was a jury in 20 countries that initially determined the ten best songs internally. Then the individual juries awarded 12, 10, 8, 7, 6, 5, 4, 3, 2 points and 1 point to these ten best songs. For the first time, viewers in Germany, Austria, Switzerland, Sweden and the United Kingdom were able to take part in the so-called telephone voting. Nevertheless, some point announcers, for example in Austria and Switzerland, still spoke of a jury, in Germany Christina Mänz spoke of the "Result of the German telephone voting". All other countries had a jury, most of them for the last time.

1 English is the official language of Malta alongside Maltese, which is why Malta was able to compete with English-language songs when songs in their own national language were required.
a. with English title

The countries marked in red had to sit out of the following competition due to their poor placements in the last five years. 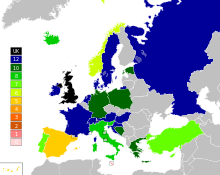 United Kingdom Scoring Map by Country for the Winning Title