The 30th Eurovision Song Contest took place on May 4th 1985 in the Scandinavium in Gothenburg . Israel and Greece participated again. Yugoslavia and the Netherlands canceled their participation, so only 19 nations were at the start. For the first time in the history of the Eurovision Song Contest, the Netherlands decided not to participate. One song in Dutch was performed anyway. The Belgian contribution Laat me nu gaan by Linda Lepomme was written in Dutch.

For Germany, the Wind group took part with the title For Everyone , which came in 2nd. Children of the world, the Austrian song by Gary Lux took 8th place, Mariella Farré and Pino Gasparini took 12th place in Switzerland with piano, piano .

Norway , which had previously been notorious for its chronically poor track record , won a sensational victory. The members of the winning duo Bobbysocks - Hanne Krogh and Elisabeth Andreasson - were represented both before and after as soloists and in various formations at the competition.

One moment of this Eurovision Song Contest was particularly remembered. When presenter Lill Lindfors came back on stage after the break, she seemed to stagger, lost the bottom of her dress and stood there in panties. A murmur went through the hall. She just smiled and undid a few ribbons on her shoulders and let loose pieces of fabric down so that she was back on stage in an evening dress. Then she said coolly: "Just a little something to wake you up a little, because now it's about the points ..."

The Scandinavium in Gothenburg held 12,000 spectators - never before have so many spectators attended the competition as this year. 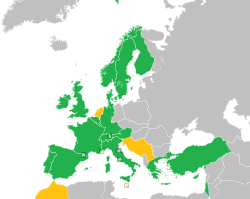 Various performers returned to the competition in 1985:

In each country there was an eleven-member jury, which initially determined the ten best songs internally. Then the individual juries awarded 12, 10, 8, 7, 6, 5, 4, 3, 2 points and 1 point to these ten best songs.

a. with English title
b. in a few words in English and German