The 44th Eurovision Song Contest took place on May 29, 1999 in the Usshishkin Hall in the International Convention Center in Jerusalem . After Norwegian television complained when the ESC was being held in 1996 that there were problems finding sponsors, the “Big 4 rule” was introduced; this means that Germany , France , the UK and Spain can take part in any competition, regardless of how they did in the previous year. France was the first to benefit from it - otherwise it would not have been allowed to take part in 1999. But also this year one of these countries was able to use this rule, namely Spain. They were allowed to participate in 2000, although they were last. 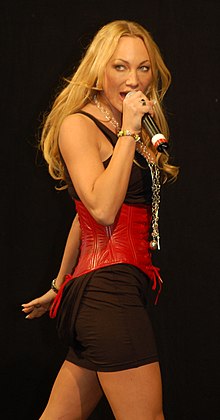 Artist of the winning title, Charlotte Nilsson , in 2008

For the first time since 1976, the participating countries were again allowed to sing in the language of their choice - primarily English; up to and including 1998, each country had to compete in the official language (s). This freedom of language has been in effect since then and has decimated the proportion of contributions in the national language.

For Germany, the group Sürpriz with the title Reise nach Jerusalem - Kudüs'e seyahat took part, which landed in third place. The singer Corinna May had won the German preliminary decision with the title Listen to the children . Since the title had already been published in English, she was disqualified.

Bobbie Singer took tenth place in Austria with Reflection . The winning song was the Swedish post by Charlotte Nilsson with Take Me to Your Heaven , but how the Icelandic title All Out of Luck of Selma in Germany and Austria terms of points little support found. Lithuania was represented again after the unsuccessful premiere in 1994, but only came in 20th place. Bosnia-Herzegovina reached the top ten for the first time with seventh place and a title sung in French and Bosnian, but had to sit out in 2000 due to the very poor results since 1995, which is still a record in times of relegation.

For the first time there were three presenters, including Dafna Dekel , who had already competed as an interpreter for Israel at the 1992 Eurovision Song Contest . The five-year average was used to qualify the participants for the year 2000, which means that Cyprus also qualified with its penultimate place.

At the end, after winning the title, all performers sang the winning title of the 1979 competition Hallelujah as a message of peace to the people of the Yugoslav wars .

This year the Barbara Dex Award , initiated by a fan site, was presented for the third time. The “worst” outfit of the competition is to be awarded with this price, which should not be taken very seriously. This year's winner was Lydia from Spain.

Bosnia-Herzegovina , Denmark , Iceland , Lithuania and Austria were there again. Finland , Greece , Macedonia , Romania , Switzerland and Slovakia had to take a compulsory break. Russia was not allowed to take part in the competition in 1998 and was not allowed to start this year either, because last year's event was not televised, as stated in the EBU regulations. It should be mentioned here that Switzerland participated in the German preliminary decision with one song.

The following performers returned to the competition:

a. in a few words in Hebrew

The countries marked in red had to suspend in the following year 2000 because of their poor five-year point average.