In the 1970s and 1980s, Pugacheva's "Theater des Liedes" created new rhythms and forms of representation that were previously unknown in Eastern Europe. She campaigned for the liberalization of art in the Soviet Union and called for more individualism and creativity on stage. With her new forms of music, Pugacheva tried to combine Western rhythms with Russian melodies. Experimenting with different forms of music is characteristic of her work - from folk songs and romance to hard rock . Her songs occupied top positions in the charts for years. Pugacheva received numerous prizes and awards, she was the first Soviet singer to go on world tours and worked with ABBA , Udo Lindenberg and Joe Dassin , among others .

Since the late 1980s, Pugacheva has been increasingly committed to the young singers as well as in various social and political areas and as an entrepreneur.

Beginnings of the career

Alla Pugacheva was born in Moscow on April 15, 1949 . Her parents - Boris Pugachev ( Russian Борис Пугачёв , 1918–1982) and Sinaida Odegowa ( Зинаида Одегова , 1922–1986) - were engineers. From the age of seven she attended a music school. After the tenth grade, she moved to the Ippolitow Music School, department for choral conductors. After a first radio appearance, in 1966 she undertook her first tour with an agitation brigade through eastern Siberia . 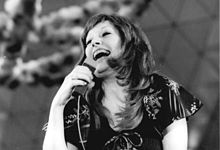 In 1975 she was sent to Bulgaria to represent the Soviet Union for the “Golden Orpheus” festival . Pugacheva sang the song "Arlekino" ("Harlequin") by the Bulgarian musician Emil Dimitrov.

After giving up her work with the band "Wesjolyje Rebjata" ( Весёлые ребята , "Happy Guys"), she enrolled at the Upper Theater Academy of the USSR . In addition, she recorded a double album - "Serkalo Duschi" ( Зеркало души , "Mirror of the Soul") - and made her own musical film. Both in the album and in the film there were many songs that Pugacheva wrote himself. In 1978 she won the Grand Prix of the Polish Festival in Sopot , and in 1979 her film musical “Schenschtschina, kotoraja pojot” ( Женщина, которая поёт ; “A woman who sings”) was shown in Soviet cinemas. The film was voted "Film of the Year" with 55 million viewers.

After Pugacheva had successfully graduated from the academy in 1980, she began working with the Latvian composer Raimond Pauls . In 1980 they both performed their composition “Maestro” ( Маэстро ), in 1981 “Starinnyje Tschassy” ( Старинные часы ) and 1982 “Million alych ros” ( Миллион алых роз ) came out, which were extremely successful in the Soviet Union. Hundreds of millions of cassette recordings circulated in the country because the official LPs were unaffordable for the provincial residents.

Alla Pugacheva was also known in the West. As early as 1981 she received the “Golden Microphone” as singer of the year in the Federal Republic of Germany. ; In 1982 she received the "Olympia" in Paris, and it was received with great enthusiasm in Japan. In 1984 her maxi album "Soviet Superstar" came out in Scandinavian countries, on which half of the songs are sung in English. Especially in Scandinavia, France and Eastern Europe the album was a great success. Pugacheva received the "Golden Album '82" from Europe, and in Finland she was named "Woman of the Year". The new ferry to Leningrad was baptized in her name.

Alla Pugacheva was also involved in politics. Among other things, she organized a concert against nuclear energy and took part in a march in Munich in memory of Olof Palme .

The beginning and middle of the 1980s were characterized by particularly intensive work. She now had her own band "Recital" and her own authors such as Pauls and Ilja Resnik ( Илья Резник ). She wrote a lot herself, developed new techniques, motifs and compositions, moderated her own shows, recorded albums and shot film musicals. After the Chernobyl disaster , Pugacheva drove to the contaminated city and held a charity concert. Pugacheva became more and more of a public figure, which led to conflicts with the party. Her songs were banned in 1987 on the pretext of a scandal. But in December of the same year the ban was lifted after a wave of protests across the Soviet Union. In the same year Pugacheva toured the United States and Israel. At the same time, their “Theater des Liedes” was officially founded and recognized. In 1989 she made another tour all over the world to Australia. In mid-1990 Pugacheva became the first Soviet singer to record a CD - "Alla".

She began promoting young talent as early as the late 1980s. For this she conceived the show “Roshdestvenskije Wstretschi” ( Рождественские встречи , “Christmas Meeting ”), in which popular singers performed alongside unknown young people. At that time her collaboration with Pauls was over. She now worked with the young composer Igor Nikolajew and later with Vladimir Kuzmin .

Pugacheva has a daughter, the singer and actress Kristina Orbakaite (* 1971), from her first marriage to the Lithuanian Mykolas Edmundas Orbakas (* 1945).

In her fourth marriage, she was married to the Russian-Bulgarian singer Filipp Kirkorow . In March 2005, she divorced Kirkorov. On the divorce date, she appeared with her boyfriend Maxim Galkin , who thanks to her support became one of the most popular comedians and presenters in Russia. In December 2011, Pugacheva and Galkin married.

Pugacheva lives in Moscow today . On September 18, 2013, 64-year-old Pugacheva and her husband Galkin, 27 years her junior, became the parents of twins Yelisaveta, called Lisa, and Garri, who had been born to a surrogate mother .

LP, singles and maxi singles (which consist of less than 5 songs) are marked with *.

Russia at the Eurovision Song Contest