from Wikipedia, the free encyclopedia
This is the spotted version , flagged on August 19, 2020 . There are 3 pending changes that have yet to be viewed.

This article describes the pop singer Jürgen Drews. For the medic of the same name, see Jürgen Drews (medic) . 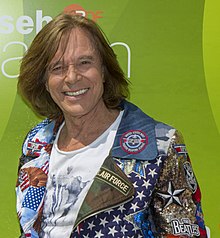 Drews was born in 1945 in Nauen in Brandenburg as the son of Wehrmacht doctor Werner Drews and his wife Lieselotte . He spent his youth in Schleswig . Here he had his first appearances as a musician on the stage of the Hotel Hohenzollern. After graduating from the Schleswig Cathedral School , he was enrolled as a medical student in Kiel for four semesters from autumn 1967 , but broke off his studies in favor of music.

In Berlin, Jürgen Drews met the photo model Dagmar Hädrich, with whom he was in a relationship for nine years. From 1981 to 1985 he was married to Corinna Drews , with her he has a son born in 1981. The marriage ended in divorce in 1985. In 1991 he met Ramona Middendorf, the daughter of a Dülmen grocer. The couple married in 1994. They have a daughter, singer Joelina Drews , who was born in 1995 . The family lives in the Münsterland in Dülmen- Rorup . Drews also spends a lot of time on Mallorca , both professionally and privately . Jürgen Drews received the nickname "King of Mallorca" from Thomas Gottschalk in 1999 in the show Wetten, dass ..? in Mallorca. In 2011, Drews opened a bistro of the same name in Santa Ponça .

Jürgen Drews turned to music at an early age and at the age of 15 he received an award as the best banjo player in Schleswig-Holstein as a member of the jazz band 'Schnirpels'. He then played in the school band 'Monkeys', and later he joined the Kiel band Chimes of Freedom as solo guitarist in 1967. At the instigation of their manager, the band changed their name to 'The Others'. In the same year Jürgen Drews took part in the first film in the series Die Lümmel von der Erste Bank as a student. With the producer Giorgio Moroder , who was then employed by the record company Ariola , two long-playing records were made - the first under the title Kannibal Komix - and several singles. The band called themselves Apocalypse for releases in the USA, but when the American record company went bankrupt , they broke up at the end of 1969.

After a brief interlude as an actor, Drews joined the Les Humphries Singers as a singer in the early 1970s . In 1973 he started a solo career in parallel and had his breakthrough in 1976 with the hit Ein Bett im Kornfeld (a cover version of the country song Let Your Love Flow by the Bellamy Brothers ). A short time later, Drews also had an appearance with the same song in the ZDF hit parade , which was important for interpreters of German hits at the time, in which he was a regular guest singer with four different titles over the next three years. In 1977 he also tried his hand as a supplier of film music ( Let's play love ). His song Wir zieh'n ton 'Abend auf Dach , published in 1978, was also a cover version ( Call On Me by Sunrise , 1977) and reached number 21 in Germany.

In 1980 he tried to start a career in the USA. He released an LP for it under the pseudonym "JD Drews". The first single from the album, Don't Want Nobody , peaked at number 79 on the Billboard Hot 100 in 1981 . The album was not commercially successful, although it received praise from the US music magazine Billboard . In contrast to its reputation as a pop singer in Germany, the album was more oriented towards New Wave and Progressive Rock . At the end of the 1980s he became the host of the hit parade in the third television program.

In the early 1990s he made a comeback on the German music market. He now also worked as a music producer . In 1995 he landed a hit in collaboration with Stefan Raab and Bürger Lars Dietrich when they released a new recording of the Drews classic Ein Bett im Kornfeld under the name "Stefan Raab und die Bekloppten" . The hit König von Mallorca , in which he sings about S'Arenal and the Ballermann and declares himself “King of Mallorca”, brought him into the center of public interest again in 2000. A cover version of Hey! Amigo Charly Brown , number 1 in the German party charts in 2002, made it into the top 50 sales charts and also made it onto music television with the music video produced by Thomas Sandmann .

In 2007 Jürgen Drews joined forces with former colleagues from the Les Humphries Singers, Peggy Evers-Hartig, Tina Kemp (formerly Werner) and Judy Archer as well as new colleagues to form the formation 'Les Humphries Singers Reunion'. The comeback of the group is presented with old, newly recorded titles as well as gospel songs and new own songs by producer and choir member Willi Meyer. In December 2018 he became a member of the charity project Schlagerstars für Kinder and recorded the song Auf once again with the group .

The others were also known as Apocalypse , Kannibal Komix and The Others and consisted of the four members Jürgen Drews, Ralf Lepsch, Enrico Lombardi and Gerd Müller-Schwanke. The band existed from 1966 to 1969.