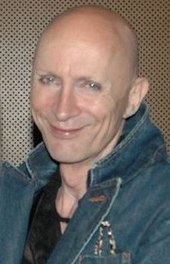 Richard O'Brien (* 25. March 1942 in Cheltenham , England as Richard Timothy Smith ) is a British actor , writer and composer . He wrote the musical The Rocky Horror Show , which was filmed in 1975 as The Rocky Horror Picture Show .

In the 1970s, O'Brien created the musical The Rocky Horror Show as a tribute to the horror films of the 1950s and 60s. Before that, he had already worked in smaller roles in touring productions of Hair and Jesus Christ Superstar . He drew inspiration for his musical from Hollywood B-movies , science fiction films and comics, and musically from rock 'n' roll . In 1975, the film adaptation The Rocky Horror Picture Show was released .

In the following years he had mostly smaller roles in various films and TV series as well as in the sequel to the Rocky Horror Picture Show Shock Treatment , which however could not build on the success. From 2007 to 2015 he was the dubbing voice for Ferb's father Lawrence "Dad" Fletcher in the US animated series Phineas and Ferb . At the Berlinale 1998 O'Brien received a special Teddy Award for his life's work.

In 2008, the interview magazine Galore stated that O'Brien was married twice, had three children and lived in London. When asked about his gender-fluid gender identity , O'Brien replied to the British Times in 2009 (translated): “There is a continuum between male and female . Some are hardwired one way or the other, I'm in between. Or a third gender , I could see myself that way. ”He felt that he was transgender early on (as inconsistent with his birth gender), but felt unhappy about it, mainly because it was rejected by society. He has had bad experiences with gender reassignment measures and rejects them for himself. In 2013, O'Brien told the BBC : "I probably see myself as around 70% male, 30% female." When asked which field he would click when choosing a gender, if there was a third field next to man / woman: "Me would mark 'M' [...] But would also like to be able to choose 'Other'. "When O'Brien commented on a controversy over a statement by feminist Germaine Greer in 2016 , he told British Metro magazine:" I am thinking of myself than a third gender and that makes things easier. I'm somewhere in the middle. My wife and children love me and celebrate me for who I am. "