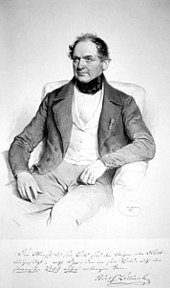 In 1802 Bäuerle made his debut with the novel Sigmund the Steel , which was rejected. After his school days in Vienna, Bäuerle got a job as a court official.

In 1804, at the age of eighteen, Bäuerle founded the Wiener Theaterzeitung . Until 1847 this was the newspaper with the highest circulation in all of Austria. Between 1808 and 1828 Bäuerle worked in Vienna as a secretary at the Leopoldstadt Theater and, by virtue of his office, favored the Volkstheater . From 1828 onwards he worked almost exclusively in the editorial department of his theater newspaper and also engaged the writer and joke Moritz Gottlieb Saphir .

After the death of his first wife in 1828, he married the actress Katharina Ennöckl on May 3, 1829, with whom he had had a relationship for years.

In 1848 he founded the magazine The Scourge , which played an important role during the revolutionary year. The resulting difficulties with the authorities led him to found the Volksbote in December 1848 . This newspaper later became the Vienna Telegraph .

Bäuerle had been writing since his school days, but it wasn't until 1852 that he was able to publish his first novel . The pseudonyms JH Fels and Otto Horn dominate his early work . Bäuerle founded the Viennese local novel with his literary work . In 1813 he created the figure of the umbrella maker Chrysostomus Staberl in Die Bürger in Wien , with whom he replaced the Hanswurst and the Kasperl . Together with Josef Alois Gleich and Karl Meisl , Bäuerle was one of the “big three” of the old Viennese folk theater before Ferdinand Raimund .

The legal aftermath of his involvement in the March Revolution ruined him financially and ruined his health. When Bäuerle had to fear for his freedom, he fled to Basel on June 17, 1859 . There Adolf Bäuerle died about a quarter of a year later on the night of September 19-20, 1859. In 1869, Bäuerle's remains were exhumed and transferred from Basel to the family crypt at Erlaa Castle.

In 1885 the Bäuerlegasse in Vienna- Brigittenau (20th district) was named after him.