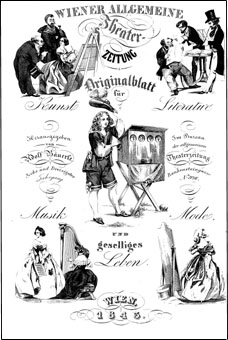 The Wiener Theaterzeitung (also: Bäuerles Theaterzeitung , Wiener Allgemeine Theaterzeitung ) was a magazine of the Vienna Vormärz , founded by Adolf Bäuerle , which appeared from 1806 to 1860 and was the most popular and most widely read newspaper in the Austrian Empire . It brought the latest news from art, literature, music and social life. The first edition appeared on July 1, 1806.

The Wiener Theaterzeitung was a newspaper-like periodical and one of the leading European papers of the Vormärz for the areas of theater , music , literature , fashion and sociability . It included dramatic texts , prose and poetry , but also topicalities in every form, mostly short, such as the rubric "Quick, what's new?" It appeared over half a century, several times a week, from 1806 to 1860, and offered a cultural-historical overview with theater reviews, essays and studies.

The newspaper was the life's work of its only editor, Adolf Bäuerle , who founded it in 1804 at the age of 18; contemporaries referred to it as Bäuerle's theater newspaper . The editorial staff was not exclusively devoted to the topic of theater; in its second year of publication the title was newspaper for theater, music and poetry . From then on, the columns were filled with comprehensive cultural and entertainment reporting from the cultural metropolis of Vienna and from all other important European capitals and led to remarkable achievements in the field of columnist entertainment and information press .

Bäuerle (1786–1859) was the author of more than 70 plays for the Alt-Wiener Volkstheater , in 1813 he wrote his first play, Children and Fools Speak the Truth , for the theater in the Leopoldstadt , where his plays were performed for the next thirty years. In the same year the great success " The Citizens in Vienna " followed, which established the popular figure of the Staberl . Until 1827 he wrote three to four pieces a year. After that, Bäuerle limited himself to journalism until 1848 .

In 1822 Bäuerle invited the writer and critic Moritz Gottlieb Saphir to Vienna and hired him for his newspaper. Here Saphir made himself so unpopular through merciless theater reviews and various essays that he was expelled in 1825 and went to Berlin. Even Johann Nepomuk Hofzinser , Hermann Günther Meynert (pseudonym: Janus) and Friedrich Witt Hauer worked as a critic for Bäuerle.

The paper was a leader in journalistic innovations: from the gradual format enlargement, the introduction of high-speed press printing , the establishment of its own network of correspondents, to color copper supplements that attracted audiences.

Johann Nestroy in the role of Sansquartier in "Twelve Girls in Uniform".
Colored copper engraving from the Wiener Theaterzeitung, 1831.

Satyrical picture No 38 "China is modernizing"

In 1818 there were picture supplements for the first time that met the readers' love for theater: portraits of actors engraved in copper. In 1826 a “gallery of funny scenes, presented on the Vienna stages” was offered, which were executed in watercolor by the artist Johann Christian Schoeller , engraved in copper and carefully colored. Especially the performances of the Viennese suburban theaters found their way into the gallery , occasionally also performances by the Hofburgtheater and the Kärntnertortheater .

In addition to Bäuerle's own plays at the theater in the Leopoldstadt , the gallery also displayed plays by Johann Nestroy and Ferdinand Raimund , but also actors such as Wenzel Scholz and Therese Krones .

The satirical images of "Cajetan" (pseudonym of Anton Elfinger ) mediated in 1850 and socially critical and political content.

As a result, the newspaper offered its readers a wide variety of picture cycles in hand-colored copper inserts:

With a circulation of 5,000 to 6,000 copies at that time and a distribution area in the entire German-speaking area, the Wiener Theaterzeitung was the highest-circulation newspaper in all of Austria until 1847 and, despite the frequency of title changes (twenty times in four years), was able to record a remarkable level of loyalty.