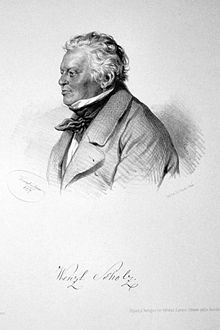 Wenzel Johann Scholz , also Wenzislaus Johann Scholz , actually Wenzel von Plumeke (born March 28, 1787 in Innsbruck , according to other sources in Brixen , † October 5, 1857 in Vienna ) was an Austrian actor in Laibach , Klagenfurt , Graz and in Vienna especially of the old Viennese folk theater , which became known in particular as a congenial partner of Johann Nestroy in his antics and comedies .

In many biographies Maximilian Scholz (1744–1834) is given as the father. His father, however, was the actor Leopold Scholz (1748–1826), who may have been a brother or close relative of Maximilian. The error possibly results from the fact that both Scholz had a born Tilly as a wife.

Scholz was an actor's child, whose talent protested early on against the forced occupation of a businessman.

He made his debut in 1811 at the age of 24 in his mother's theater troupe in the role of Truffaldino in Friedrich Schiller's “ Turandot ” and then appeared mainly in Laibach and Klagenfurt. In March 1815 he was committed to the Hofburgtheater in Vienna for several weeks , his debut was the Traugott in August von Kotzebue's play “Brotherly Dispute or Reconciliation”. Since his abilities were not recognized and he "soon felt the oppressive atmosphere of the noble atmosphere", he became a " Punch ", as his father exclaimed punishingly. When Scholz realized that he was destined to be a comedian in the local field, he left the Burgtheater in September 1815 and made a guest appearance at the theater in the Leopoldstadt . Since he was not engaged there despite good reviews, he returned to Klagenfurt, where he mainly worked in batch and episode roles and as a young comedian until 1819 , but also gave some of his later Viennese star roles with great success. Scholz spent the next few years with various theater companies with whom he toured the Austrian provinces in Styria and Carinthia . In 1819 he succeeded in becoming a member of the ensemble at the Theater in Graz for seven years, where he appeared as a comedian in Kasperl, Thaddädl and Staberl roles.

In 1826, at the age of 39, Scholz returned to Vienna to work at the Theater in der Josefstadt , where his first role was Truffaldino in Carlo Goldoni's The Servant of Two Masters . From May 1827 he appeared at the Theater an der Wien and was popular with audiences and critics as Staberl in Adolf Bäuerle's Die Bürger in Wien . Wenzel Scholz achieved his ultimate breakthrough as a popular comedian in 1826 in the role of Klapperl in Karl Meisl's “The Black Woman”, a parody in which, with a grotesquely drastic appearance with a flat neck and “no voice”, he brought the audience to a frenzy and loud witnesses for a nonsense - couplet up to ten times appear on the scene had to further " gibberish " (French. absurd, nonsense ) to give the best. His popularity "soon increased to adoration" ( Alexander von Weilen , Allgemeine Deutsche Biographie 1891).

Director Carl Carl transferred Scholz to the Theater an der Wien , where he became the partner of Johann Nepomuk Nestroy from 1831 . From 1832 to 1852 Scholz played at the Leopoldstädter Theater (from 1847: Carltheater ). The many great successes of the famous duo arose from the fact that Nestroy wrote many roles for himself and his partner Scholz. Scholz's external appearance, a stocky figure, a round, mostly motionless face with nimble, lively eyes and his mostly phlegmatic temperament, which stood in contrast to Nestroy, mainly contributed to the comical effect of his play. The Scholz / Nestroy constellation can be compared with famous comedian couples such as Arlecchino and Pantalone in the Commedia dell'arte and later Karl Valentin and Liesl Karlstadt or Laurel and Hardy .

The interplay between Scholz and Nestroy in Der böse Geist Lumpacivagabundus (1833) with Wenzel Scholz as tailor Zwirn, director Carl Carl as carpenter Leim and Nestroy as shoemaker Knieriem as a "dissolute craftsman clover", but also in Nestroy's Eulenspiegel adaptation ( 1835), in Hutmacher und Hosiery (1837), as Herr von Lips and Schlosser Gluthammer in Der Zerrissene (1844), as servant Johann and clothes trader Damian in “ On the ground floor and first floor ” (1835), as hairdresser Schlankel and clothes cleaner Hutzibutz in Das Haus der Temperamente (1837), as father and son Pfrim in Höllenangst , in Unverhofft (1845), The Insignificant (1846, role: Intriguer Puffmann), The Protégé (1847), as Holofernes in Judith and Holofernes (1849) and as Dorfbader Gabriel Brunner in Kampl (1852).

In Nestroy's dialogue drafts, the main characters are usually with N. and Sch . marked, the first letter of Nestroy and Scholz.

Scholz was especially made for the roles of stupid, stupid servants, for example as the phlegmatic gardener's assistant Plutzerkern in Nestroy's The Talisman (1840) or as the house servant "Melchior" (a role that Nestroy had written for Scholz) in He wants to make a joke ( 1842), who stupidly repeats the sentence: “That's classic!” In a review of July 14, 1842 about a guest performance of this piece in Prague, it was said: “Nestroy's long-time partner Wenzel Scholz gives the Melchior. The role of the fat, lazy, stupid house servant, who moves like a snail across the stage, doesn't make a face and thinks everything is 'classic', is made for him. A greater contrast to the fast, hectic Nestroy is hardly conceivable, the comedy results not least from this fact. "

In addition to Nestroy's cutting irony, Scholz's original harmlessness was indispensable; Treumann's mercury technique was countered by his good-natured calm. “Johann Nestroy and Wenzel Scholz seemed to have shared the inheritance of Hanswurst : all sharpness and mobility fell to Nestroy, everything broad and comfortable came to Scholz. Nestroy always had to achieve his success; Scholz had already won when he appeared. Scholz was a representative of the competent, tolerant, Nestroy a representative of the active, attacking comedy ”(Speidel).

Nestroy wrote the play Eulenspiegel or Schabernack über Schabernack in 1835 for his friend Wenzel Scholz. It is noteworthy that Nestroy did not play the title role himself, but chose a "fat one" for Eulenspiegel, he reserved the role of the simple-minded boy Natzi, who is a forerunner of Willibald in The Bad Boys in School .

A humorous painting from 1848 shows Scholz and Nestroy as an unequal " National Guard couple", militias that were set up by the revolutionaries at the beginning of the revolution of 1848 in Vienna . The picture was an allusion to Nestroy's political interlude during the revolution, which was reflected in his farce with the song Freiheit in Krähwinkel , which had the events of the March Revolution as the background and in which Nestroy and Scholz appeared together.

Nestroy's posse in one act "The journey with the steam car" was premiered on December 5, 1834 "for the benefit" (ie as a benefit ) of his friend Wenzel Scholz at the Theater an der Wien .

In his comedy, Scholz was the last representative of a naive burlesque comedy that succeeded Hanswurst . It was only in Scholz's late period that the drastic comic means were withdrawn in favor of greater internalization and psychological deepening, as in the role of the idealistic country doctor Gabriel Brunner in Nestroy's late work Kampl (1852), the love and inheritance matters from the nobility to the locksmith with brilliant Wants to balance bon mots , metaphors and reasoning and as an organizing authority fights on the side of loyalty and good character.

Despite his obesity, Scholz had a high degree of agility at his disposal. Contemporaries report of a daring jump in the air, a pirouette that Wenzel Scholz performed at an advanced age in Nestroy's farce The Insignificant and that caused the audience to ovate and so-called “evoke” ( applause ).

The Viennese court actor Karl Ludwig Costenoble wrote about Scholz: “Man has an inexpressible power! He can repeat the blandest things three or four times - they never get boring, on the contrary, he utters one and the same idea or remark so differently in his keys that the desire to laugh is always heightened. " Scholz was unmatched in his genre, until a worthy successor was found in Josef Matras .

On March 28, 1856 in the Carl Theater anonymous act play Wenzel Scholz and the Chinese princess as a charity piece on the occasion of the 70th birthday of Wenzel Scholz listed. Scholz searches in vain for an author who will write a play for him and receives a package that only contains blank sheets. With the help of a few bottles of wine, which are supposed to "inspire" him, he decides to write the piece himself and falls asleep over it. The dream takes him to China, where he is supposed to marry a princess and, revealed as a comedian, lose his life. He is woken up just in time and thus has the material he is looking for for his piece.

This one-act play is testimony to the collaboration of the famous comedian quartet Johann Nestroy , Wenzel Scholz, Karl Treumann and Louis Grois at the Carltheater at a turning point from the posh comedy of the old Viennese folk theater , which ended with Wenzel Scholz, to the 'new' comedy after 1850 on the way to the operetta .

Karl Haffner made Scholz the hero of a drama ( Wenzel Scholz , a genre picture from the artist's life with song and dance in three acts, 1858) and a folk novel.

Wenzel Scholz was married twice. The two sons Eduard († 1844 at the age of 34), Anton († 1846, suicide) and the two daughters Josephine Leeb (major's wife) and Karoline von Franck (major's wife, married to) came from the first marriage with Antonia Rupp, daughter of a printer Alfred Ritter von Franck ), who both had mediocre acting careers. The marriage is said not to have been a happy one because his wife was a spendthrift. After the death of his first wife in 1844, Scholz married Therese Miller for the second time six years later at an advanced age. This second marriage remained childless. An illegitimate child Scholz 'can be proven.

In his private life, Scholz was serious and taciturn and only devoted to tobacco smoking and card games , where he regularly lost, but with great equanimity , although it plunged him into great financial hardship. Director Carl Carl knew how to skillfully exploit Scholz's financial calamities through advances, loans, the purchase of his benefit performances and the like. Scholz only received appropriate remuneration under Nestroy's management.

Scholz was the only one to whom Director Carl Carl gave a substantial sum as a pension in his will. Nevertheless, the latter denied him the desire to go to the kk Hofburgtheater , which at that time meant the culmination of an acting career.

At the age of 70, Wenzel Scholz died after a brief illness. Contemporary witnesses report the enormous participation in the funeral , tens of thousands of Viennese are said to have given him the last escort to the old cemetery in Dornbach , hundreds of equipages followed the coffin. Johann Nestroy, his longtime friend and partner, however, went away in order not to have to attend the funeral as he could not bear the thought of death. In 1900, Scholz's body was exhumed at the instigation of his granddaughter and reburied in Traunkirchen .

Wenzel Scholz is immortalized on the iron curtain of the Theater an der Wien next to Nestroy and Raimund and Mozart's Magic Flute .

The Scholzgasse in Vienna's 2nd district in the Augarten was named in 1874 by Wenzel Scholz.