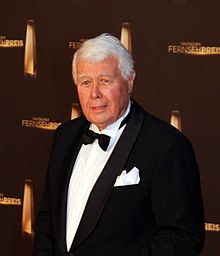 Peter Weck (born August 12, 1930 in Vienna ) is an Austrian stage and film actor who also worked as a director , theater producer and theater manager. He rose to prominence as a performer in entertainment films in the 1950s and 1960s, and achieved television popularity as the father in I'm Marrying a Family in the 1980s. As artistic director in Vienna, he brought the musicals Cats and The Phantom of the Opera to German-language premieres. In addition to being Austrian, Weck is also a Swiss citizen.

Peter Weck was born as the second son of an engineer and manufacturer of bottle caps in Vienna. At the age of ten he became a member of the Vienna Boys' Choir in 1940 and sang as a soprano soloist . For four years he performed international concerts under the direction of Ferdinand Grossmann , including in Sweden and Spain . Under the direction of Oscar Fritz Schuh , Weck appeared in Mozart's opera Die Gans des Kaliph in 1941 as the overseer Murat. When he broke his voice in autumn 1944, he left the Vienna Boys' Choir. Weck saw the end of the war in Pitten , which his grandfather had presided over as mayor; in autumn 1945 the family returned to Vienna.

After graduating from high school , he attended the University of Music and Performing Arts Vienna from 1949 and studied piano, clarinet, harp, orchestral percussion and bassoon with the aim of becoming a conductor. However, he broke off this course in 1951. At the same time, at the request of his father, he started studying mechanical engineering at the Technological Trade Center, which he broke off after a short time. He finally completed an apprenticeship at the Max Reinhardt Seminar from 1951 to 1953 and graduated with honors.

Career in the theater

He made his theater debut in 1953 under Theo Knapp at the Stadttheater Klagenfurt as Truffaldino in Carlo Goldoni's The Servant of Two Masters . In the following year he had his breakthrough as a theater actor at the Theater am Kurfürstendamm : under Rudolf Steinboeck he took on the role of Stani in Hofmannsthal's Der Schwierige and thus his star role, which he played in numerous productions of the play at various theaters and at the Salzburg Festival until 1967 played. Axel von Ambesser , who had seen him in this role in Berlin, cast Weck in 1954 in the film Und der Himmel laughs (And Heaven Laughs) in his first screen role .

From September 1954 Weck was a permanent member of the theater in der Josefstadt and also played in the theater's chamber plays. His subject was "youthful comic roles - helpless lovers, ardent lovers, lovers in love, helpless in love and then happy or unhappy lovers, in short everything that the comedian profession prescribes so supposedly funny." Ernst Haeussermann finally brought Weck to the Vienna Burgtheater in 1959 . Weck's special contract assured him that he would be released for film work six months a year. Guest performances in the following years led Weck to Hamburg in 1964 and to the Schauspielhaus Zurich in 1965 . His last role at the Burgtheater was that of master tailor Zwirn in Johann Nepomuk Nestroys Lumpazivagabundus . In 1970 he directed the theater for the first time: at the Burgenland Festival, he staged Franz Grillparzer's Des Meeres und der Liebe Wellen with Brigitte Grothum and Alexander Kerst .

In 1970 Weck moved to Switzerland, played at the Schauspielhaus Zurich, the Munich Residenztheater and went on a theater tour. It was not until 1980 that he was seen again in a theater role in Austria: at the Wiener Festwochen he also played his last theater role for a long time in The Last Days of Mankind . Only in 2008 did he return to the theater stage in Sonny Boys at the Vienna Volkstheater alongside Harald Serafin .

Time as a theater director

Weck's goal was to establish a musical theater in Vienna. Looking for his Erstinszenierung Weck had 1981 in London that just premiered musical Cats by Andrew Lloyd Webber seen and secured the performing rights for the piece in Vienna as a result. On September 24, 1983, Cats had its German-language premiere at the Theater an der Wien. It was also the third production of the piece worldwide after London and New York. For the German-language premiere, Weck cast Angelika Milster for the role of Grizabella and, immediately after graduating from high school , engaged the then unknown Ute Lemper .

In 1987, Weck took over the Theater an der Wien as well as the Raimund Theater and the Ronacher Varieté . In January 1987 the three theaters were merged to form the United Theaters Vienna and Weck General Director of the largest theater association in the city of Vienna at the time. Cats was played at the Ronacher from 1988 and stopped at the end of 1990 after 2080 performances. Among other things, Weck made a guest appearance with the ensemble in East Berlin in 1987 and in 1988 was the first to give a guest performance with the musical in Moscow .

During his time as general manager, the German-language premieres of Les Misérables (1988) and Das Phantom der Oper (1988) fall . As a director, he was also responsible for the musical Freudiana , the first major in-house production of the Vereinigte Bühnen Wien. In Freudiana for a concept album of Eric Woolfson Weck also directed. The last production that Weck had a world premiere as artistic director was the musical Elisabeth in 1992 . 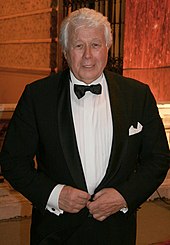 Weck made his film debut in 1954 in the homeland comedy And heaven laughs too . In the 1950s and 1960s he starred in light entertainment films and musical comedies, among others on the side of Hans Moser and Theo Lingen . He often shot under the direction of Franz Antel , Franz Josef Gottlieb , Harald Reinl and especially Harald Vock . With his girlfriend at the time, Cornelia Froboess , he appeared in several films, including the popular hit Mariandl . He played three times at the side of Romy Schneider : Already in 1954 in the girlhood of a queen , in 1955 in the first Sissi film and in 1963 in the US production Der Kardinal by Otto Preminger , after A Greetings from Vienna (1962) his second US American Production. Here he played the Jewish banker Kurt von Hartmann, who threw himself out of the window in despair when the Anschluss in 1938. The role was one of the few that deviated from the usual casting scheme of Weck, who described Weck itself as that of a “charming, cheerful Sir and mischievous Sonny Boys”. “He woke himself up and grunted with more than a hundred laughs in German film humor,” summarized Der Spiegel in 1986.

Weck first became known to a broad television audience in the 1960s as the presenter of the music programs We Make Music (1960) and Music for You (1962–1963). In 1971 he was seen in the popular television series When the Father with the Son as a partner of Fritz Eckhardt . The 14-part ZDF television series I marry a family , which was broadcast in 1983 and which he directed and, contrary to original plans, took on the role of father Werner Schumann, ran successfully on television from 1983 to 1986. In 1986, Der Spiegel described Weck as the “favorite daddy of the television people”.

In 2016 he took part in the 147th edition of the ARD - the game show Who knows something? part, in which he met his former serial daughter Julia Biedermann again and to whom he was defeated at the side of team captain Bernhard Hoëcker .

As early as 1969, Weck had help with the mistake comedy , I love twins! directed for the first time. Several entertainment comedies followed under his direction, in which he also acted in part as an actor. For television he also created various television portraits of professional colleagues, including Theo Lingen ( Lingen über Lingen , 1976) and Willy Millowitsch ( Der Kölsche Jung: Willy Millowitsch in portrait 1978). With his own film production company cinevista film, Weck also produced television films and series from the late 1980s, including 13 episodes of the series Heiteres Bezirksgericht .

Peter Weck's older brother, the painter and graphic artist Herbert Tasquil (1923–2008), was a full professor for design at the University of Applied Arts in Vienna.

Weck met the mannequin Ingrid Muttone in 1966. They married on June 22, 1967; the marriage has a daughter and a son. Ingrid Weck died unexpectedly of a heart attack at the end of April 2012 and was buried in Vienna's central cemetery. Weck then withdrew from the public for several months.

Weck is an active fan of hunting and a passionate skier. He is considered a connoisseur and wine lover. In 1993 he was named Feinschmecker of the Year by Underberg and Gault-Millau and received the Bacchus wine award “for outstanding services to Austrian wine culture” from the Austrian Viticulture Association and Austrian Wine Marketing . Weck is involved, among other things, in the Deutsche Lebensbrücke project , which supports children with leukemia in Saint Petersburg.

In December 2010, Peter Weck published his biography Was it that ?: Memories . He lives in Vienna.