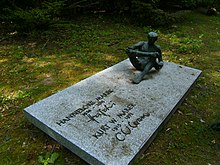 Gravestone of the Marek couple in the Ohlsdorf cemetery in Hamburg

CW Ceram (born January 20, 1915 in Berlin ; † April 12, 1972 in Hamburg ; actually Kurt Wilhelm Marek ) was a German journalist , editor at Rowohlt Verlag (1945–1952) and author , who became known for his works on archeology . He formed the pseudonym Ceram from his name Marek as an ananym read backwards in order to distinguish himself from his earlier works.

During the Second World War , Marek was a lieutenant and, as a war reporter, a member of a propaganda company .

His popular science book Gods, Graves and Scholars (with the distinctive subtitle Roman of Archeology ), published in 1949, became a bestseller worldwide . On February 23, 1950, the Rowohlt publishing house announced that it had sold around 12,000 copies within five weeks at a price of DM 12.00  (around 32 euros based on today's purchasing power). The book has also been translated into 28 languages ​​and sold around five million times. Through its easily understandable communication of methods and recent findings, this work has made archeology extremely popular. That is why an archaeological non-fiction book prize donated by the Rheinisches Landesmuseum Bonn was named the Ceram Prize .

In the late 1960s, Ceram wrote his bestseller The First American in Woodstock .

Ceram was buried in the cemetery in Hamburg-Ohlsdorf . The grave slab is marked by the bronze sculpture of a reading youth.

Envelope of gods, graves and scholars