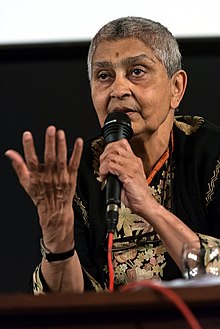 Gayatri Chakravorty Spivak (born February 24, 1942 in Kolkata ) is Professor of Literary Studies and Director of the Center for Comparative Literature and Society at Columbia University , New York. Spivak is considered a co-founder of the post-colonial theory . Her work focuses on the literature of the 19th and 20th centuries, feminism and Marxism , deconstruction and globalization .

Gayatri Chakravorty Spivak graduated with honors from the Presidency College of Calcutta University in English and Bengali literary subjects . In 1959 she went to Cornell University ( USA ) and in 1962 took the MA exam .

While Spivak taught at the University of Iowa , she received her doctorate in 1967 with Paul de Man at Cornell. In 1976 she published her highly acclaimed translation of Jacques Derrida's De la grammatologie . In the 1980s she joined the Subaltern Studies Collective around the historian Ranajit Guha . In 2012 she was awarded the Kyoto Prize for Art and Philosophy.

In collaboration with the subaltern studies , Spivak seeks a mediating position between traditional neo-Marxist critical theory and postmodern approaches to deconstruction , which she also criticizes as ethnocentric . Among other things, she analyzes the situation of the “marginalized” ( actually subaltern : “subordinate”, “marginalized”). Spivak works out that they are speechless in the face of the overpowering system of rule - or their language, their attempts to articulate their needs, remain unheard and misunderstood. The knowledge production of the western intellectuals prevents the subaltern from speaking. In this respect, Spivak also criticizes the representations of Western feminism and opposes this with a model of “subversive listening” that empowers people to speak.

In addition, it questions the functioning of the system of rule itself and possible ways of overcoming it. A well-known aphorism of hers is: "Unlearning one's privileges as one's loss", with which she shows how people are cut off from other knowledge through privileges themselves. In their opinion, the system of privileges can be overcome by critically questioning one's own positions, beliefs and prejudices.

In Outside in the teaching machine she describes the utilization mechanisms of the academic teaching machine , in which critical thinking also has its place, but only at the price of being checked for applicability or contributing to increasing efficiency.

Like Homi K. Bhabha and Edward Said, Spivak does not understand the “post” as an “end” of colonialism, but emphasizes its continuing influence on the identities and realities of the present. Although he advocates the deconstructivist approach, which marks identities as constructed, Spivak sees the need for “strategic essentialism ”. She emphasizes that it is politically necessary to think into identities - even if only temporarily and from a strategic point of view - in order to expose these identities as necessary false.

In 2007 she was elected a member of the American Philosophical Society .