The title of this article is ambiguous. Further meanings are listed under August von Werder (disambiguation) .

Coat of arms of Count August von Werder (from the Count's diploma of April 15, 1879) 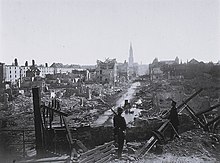 Strasbourg the day after the surrender

Werder joined the Prussian Army's Gardes du Corps regiment on June 14, 1825 with the 6th Company and was transferred to the 1st Guards Regiment on foot in 1826 as a second lieutenant . In 1839 he became a teacher in the cadet corps and later in the topographic office . As a prime lieutenant in 1842/43 he voluntarily took part in the Russian campaign in the Caucasus . After his return in 1846 he was transferred to the General Staff as a captain , and later as a major in the 33rd Infantry Regiment . In 1853 he became commander of the Landwehr Battalion in the 40th Infantry Regiment , in 1856 of the 4th Jäger Battalion , then Lieutenant Colonel in the 2nd Guards Regiment on foot and at the same time with the management of the business of the inspection of the hunters and riflemen as well as the command of the Mounted Feldjägerkorps commissioned.

In 1859 he was appointed Colonel and Inspector of the Jäger und Schützen and the Reitende Feldjägerkorps, in 1863 Major General and in 1866 Lieutenant General. During the war against Austria in 1866 Werder commanded the 3rd division near Gitschin and Königgrätz . In the war against France in 1870 he was given the command of the siege corps in front of Strasbourg . After the latter's surrender, he was appointed General of the Infantry and commanded the newly formed XIV Army Corps , with which he penetrated Franche-Comté in October , occupied Dijon and kept the Garibaldians in check. When he heard of Bourbaki's approach, he backed off to Belfort in January 1871 , was able to retreat without major losses in the battle near Villersexel (January 9th), thus gaining some time and the attack of the superior French Eastern Army in the three-day battle at the Lisaine (January 15-17) withstand and reject him. The subsequent persecution of the Eastern Army forced them to transition and internment in Switzerland .

This act of arms gave him great popularity, mainly in southern Germany. The victory monument was erected in his honor in Freiburg im Breisgau and he received an honorary doctorate from the university. In addition, there - from 1875 to 2007 - a street was named after him , as in many other cities in Baden, but also in Cologne (Belgian quarter). After the peace treaty, Werder received the Grand Cross of the Iron Cross and a grant of 200,000 thalers; also in 1871 he was appointed chief of the 4th Rhenish Infantry Regiment No. 30 . In 1875 he celebrated his 50th anniversary with a big ovation and received the requested farewell on April 1, 1879, when he was raised to the rank of count . He died on September 12, 1887 at Grüssow Castle.