Friedrich Hermann Hund (born February 4, 1896 in Karlsruhe , † March 31, 1997 in Göttingen ) was a German physicist . He made significant contributions to the development of atomic physics . According to him, are Hund's rules named.

Chicago 1929: Robert Mulliken and Friedrich Hund
A well-known method of molecular physics was named after the two, s. u.

Friedrich Hund was the son of the hardware and household goods dealer Friedrich Hund, who had lived on Friedenstrasse in Karlsruhe . He went to school in Karlsruhe , Erfurt and Naumburg an der Saale , where he graduated from high school in 1915. He broke his foot shortly before the outbreak of the First World War and was the only one in his class not to have to go straight to war. He helped his teacher Professor Paul Schoenhals with teaching the younger students. After that, Hund was deployed for two years in the Navy's weather service. His parents could not finance his studies, which is why his teacher gave him a small scholarship, which he improved with tutoring.

He studied mathematics , physics and geography in Marburg and Göttingen and passed his teaching exams in 1921/22. In Göttingen he heard with James Franck , David Hilbert , Richard Courant , Carl Runge, among others . In 1922 he received his doctorate in Göttingen with Max Born with a thesis on the Ramsauer effect , while he was doing his legal clerkship at a Göttingen grammar school. He was Born's scheduled assistant from 1922 to 1927, as did Werner Heisenberg and Pascual Jordan (both unscheduled). After his habilitation in 1925 he was a private lecturer in theoretical physics in Göttingen. In 1926/27 he spent a few months with Niels Bohr in Copenhagen . In 1927 he became an associate professor, and in 1928 a full professor of theoretical physics in Rostock . After a visiting professorship at Harvard University in 1929, he went to Leipzig . In America he also taught at the University of Chicago and a few other universities.

In 1929 he was appointed professor of mathematical physics (successor to Gregor Wentzel ) at the University of Leipzig, where Heisenberg also worked, with whom he led a seminar on the structure of matter for many years , and which became a center for theoretical physics from the late 1920s was. Hund was friends with Heisenberg and defended him - like other leading German physicists - against the threatening campaign sparked by Johannes Stark (with an article in the SS Black Corps ), which was also directed against all of "modern theoretical physics". Hund wrote letters of protest to Paul Koebe , the dean of the mathematics and natural sciences faculty at the University of Leipzig, and the Reich Minister for Education, Bernhard Rust, and suggested that Peter Debye make a statement. In contrast to Heisenberg, he was not involved in the uranium project during World War II. When Heisenberg went to Berlin in 1942, Hund took over the directorate at the Leipzig Physics Institute. In 1943, like Pascual Jordan shortly before, he received the Max Planck Medal , the highest award for theoretical physics of the German Physical Society , which had not been awarded since 1939.

After the war he became Pro-Rector in Leipzig in 1945. When the US Army withdrew at the end of June 1945, he went into hiding so as not to be transported to a camp in the west. The reason was not his house, but he did not want to be dragged off to the West as spoils of war (“slave”).

In 1946 he moved to the University of Jena as a professor , where he became rector in 1948. According to his own statements, the workload in Leipzig, where he also had to give lectures on experimental physics, was too great for him to rebuild the physical institutes. The main reason for the change, however, was: The institutes in Leipzig had been destroyed, hardly any in Jena; In Leipzig there were few colleagues, in contrast to Jena. However, an apartment suitable for seven people was a prerequisite, which is why the move almost failed.

In Jena there were conflicts with the Soviet occupation agencies, with whom he was otherwise highly regarded. In 1949 he received the GDR National Prize . Hund decreed that children of university teachers could also study, which General Kolesnitschenko repealed in line with the ideological views of the time. Hund tried to clarify the responsibilities between Jena University, the Thuringian Ministry and the occupying power. In Berlin he had managed to get 25 talented applicants to study physics in Jena. Later it was possible for applicants to study medicine or theology who were not workers 'or farmers' children to be admitted. The lack of doctors was one of the reasons.

An anonymous complaint from the university administration accusing Hund of a lack of political activity reached the ministry in September 1948. Minister Torhorst asked the rector to come to the ministry for an interview. When Hund realized that she had the order to fire him, but no real reasons, he stepped back on his own initiative. His term of office as rector thus lasted from February to October 1948. At the end of April 1949 he received a purchase slip for a pair of shoes from Thuringian Prime Minister Werner Eggerath .

At the end of July 1951, after he had returned to Jena from a guest lecture in Frankfurt / Main, he left the GDR and went to the West via Berlin with his family. He had to leave almost all of his possessions behind, but the Russian authorities later sent him his furniture and other items.

Change to Frankfurt am Main

The two most important reasons for moving from Jena to Frankfurt were: the future of his children and the political situation. He had hoped a democracy would work better.

Hund became a professor in Frankfurt am Main in 1951, succeeding Erwin Madelung . There he found his former colleague Bernhard Mrowka , with whom he had written important papers on the physics of electrons in diamonds in 1935.

In Frankfurt he wrote a. a. an extensive book “Matter as Field”, with which he - as stated in the foreword - “wants to help remove the contrast between thinking and experimenting physicists” (meaning the attempt to remedy the difference between theoretical and experimental physics).

Back in Göttingen (40 years to go)

May 1994: Friedrich Hund (right) discusses with Carl Friedrich von Weizsäcker , who did his doctorate with him in Leipzig.

February 1966: Three great physicists among themselves: Friedrich Hund, Werner Heisenberg and Max Born on the occasion of Hund's 70th birthday in Göttingen

After a guest professorship at the University of Maryland in 1956 , he returned to Göttingen as a professor of theoretical physics in 1957, as the successor to Richard Becker .

In 1964 Friedrich Hund retired . However, he remained active in academic research and teaching, not only in Göttingen, where he lectured until 1990, but also as a visiting professor in Cologne in 1968 , in Heidelberg in 1969 , in Frankfurt am Main in 1970 and later in Wuppertal. His particular expertise was in the history of modern physics, which he personally experienced and shaped.

He was blind for the last years of his life, but that did not prevent him from giving lectures and discussing.

His doctoral students include Harry Lehmann (Jena 1950), Hans Euler (with Heisenberg), Carl Friedrich von Weizsäcker (in Leipzig) and - again in Göttingen - Jürgen Schnakenberg and Gert Eilenberger and in Frankfurt Heinz Bilz . Siegfried Flügge was his assistant in Leipzig and Edward Teller was his assistant.

Even before quantum mechanics emerged , Hund interpreted the complex spectra of the elements from scandium to nickel. On the basis of quantum mechanics, he then contributed significantly to the theory of molecular spectra and to the elucidation of the relationship between term structure and symmetry of quantum mechanical systems.

In 1925 he set up Hund's rule , which was initially a purely empirical rule in atomic physics, was only established later and expanded to three rules. In 1926/27 he discovered and described what was later known as the tunnel effect (the discovery of which is mostly attributed to George Gamow ) first in optically isomeric molecules.

In molecular physics and spectroscopy , Hund's distinction is made between the so-called Hund's coupling cases (a) to (e), depending on the way in which the various quantum mechanical angular momenta (electron spin, orbital angular momentum, rotation) couple to form the total angular momentum (vector addition). Also known in molecular physics is the Hund-Mulliken method (today mostly called the molecular orbital theory ), which must be distinguished from the Heitler-London method and which also plays a major role in theoretical chemistry. In formulating it, he worked with Robert S. Mulliken , whom he had known in Göttingen since 1925 and with whom he worked in Göttingen in 1927, in Chicago in 1929 and in Leipzig in 1930 and 1933.

The Heisenberg with dog seminar achieved international recognition and attracted students from many countries. In Leipzig Hund broadened his field of work and also turned to nuclear physics. Independently of Eugene Wigner , in 1937 he was the first to investigate an approximate SU (4) symmetry in the nuclear spectra (which results from spin and isospin variance of the nuclear forces). In 1936 he also investigated the behavior of matter under very high pressure with applications in astrophysics, as well as systematic problems of theoretical solid-state physics (electron wave functions in crystal lattices, especially under the influence of magnetic fields, especially in diamond lattices).

In his later years, Hund mainly dealt with the history of physics, especially the quantum theory, the change of which he himself helped to shape in the twenties. In addition to the more specific literature mentioned below, he wrote a widespread systematic series of textbooks on theoretical physics, some of which have been translated into other languages. He wrote in 1978: I am delighted that my colleague K. Yamazaki has taken the trouble to translate my history of quantum theory into Japanese .

Hund kept a scientific diary since 1912, which - in addition to the other documents mentioned below - is kept in the Lower Saxony State and University Library in Göttingen.

His future wife received her doctorate in philosophy at the Georg-August-Universität Göttingen in 1930 with the dissertation: On the theory of almost periodic number sequences with Richard Courant . It was a mathematics topic at the suggestion of Harald Bohr and Alwin Walther . Later she dealt with the two-sided surface ornaments, among other things.

Jena 1950: Friedrich Hund with his wife Ingeborg and their five children

His final resting place is in Munich, where his wife Ingeborg, his sister Gertrud and son-in-law Dieter Pfirsch are also buried.

Leave of absence for Friedrich Hund, approved by the responsible State Secretary of the GDR for the 1951 summer semester

An extensive collection of documents from the estate of Friedrich Hund is in the Lower Saxony State and University Library in Göttingen , including the correspondence with the ministries of the GDR during the Jena period and a few years afterwards, in particular the leave of absence of Professor Dr. Friedrich Hund for the period from April 1st to July 31st , 1951 , granted by the State Secretary for Higher Education of the GDR, Prof. Dr. Harig, March 8, 1951.

The six pages of the manuscript

Page 1 of the manuscript

Page 2 of the manuscript

Page 3 of the manuscript 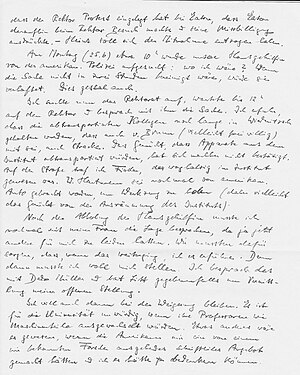 Page 4 of the manuscript

Page 5 of the manuscript

Page 6 of the manuscript

Manuscript for the withdrawal of the Americans from Leipzig in 1945

The pictures opposite show the six pages of a manuscript that Friedrich Hund produced between June 25 and July 3, 1945, when the Americans left Leipzig and transported many professors away in trucks. The original of the protocol is in the possession of his eldest son.

On page 2 Hund writes: “On the way to the tram we talked about compulsion, the sending into slavery, as what we had to look at” and on page 4: “It is unworthy of the university if its professors like Machine parts would be replaced. "

Commons : Friedrich Hund, medals and pictures from his estate  - collection of pictures, videos and audio files