In geology, grading is understood as a distribution of rock fragments sorted according to grain size within a layer. The result is the structural feature of the graded stratification .

A distinction is made between normal and inverse grading . 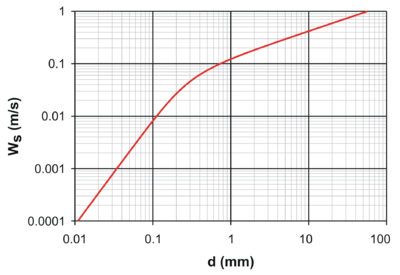 With normal grading , larger particles are at the bottom, followed by smaller ones, while the smallest are at the very top.

In a vacuum the rate of descent is the same as the rate of fall and all particles fall (sink) at the same rate, regardless of their mass and size. Surrounded by a flowable substance ( fluid ), all particles (particles) sink more slowly because a force that is dependent on the viscosity of the fluid and counteracts gravity counteracts the sinking. In a comparison of different particle sizes with one another, with increasing particle size, the mass of each particle increases much more than the forces opposing the decrease. So large particles sink faster. This is the normal grain size distribution , the large particles are at the bottom, the small ones at the top.

With inverse grading , small particles ( lying ) lie at the bottom, followed by larger ones, while the largest ( hanging ) collect at the top .

Inverse gradation occurs, for example, with