Glutine glue is a water-soluble natural adhesive that is obtained from animal waste (glue-producing bodies) by boiling it out. This creates a jelly called glue. The main component glutin is a mixture of substances similar to gelatine . According to the starting material for production, one differentiates between glutin glue as bone glue, hide glue (leather glue), rabbit glue, isinglass glue and isinglass glue.

Particularly purified glue is known under the collective term gelatine and is used in the processing and processing of food as well as in pharmacy, as an additive to beverages, for clarifying wine and in many technical applications.

Glutine glue is not to be confused with glue made from cartilage . Although this can hardly be distinguished from glutin glue on the outside, it is glue based on chondrin , a chemically different substance that has a lower adhesive strength than glutin. The substance made from cartilage is used as a dietary supplement or medicine to prevent or relieve arthritis .

Use of the individual types of glue 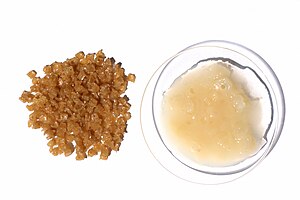 Hare glue, in pearls on the left, partially dissolved in water on the right.

Until the beginning of the 20th century, glue was the most common glue for wood, paper, leather and many other materials. Due to the development of synthetic products, which are much easier to process, it became increasingly less important, especially from the 1950s onwards. In the field of restoration and traditional handicrafts, however, it remained in use and has even gained in importance again in recent years.

Bone glue is mainly used for gluing wood. It dries as hard as glass and the glue joint usually has a greater strength than the parts to be glued. Bone glue is still preferred in musical instrument making, because the glue can be opened again at any time without any problems (reversibility). Due to its great hardness, bone glue transmits sound waves better over the glue joints of the woods used in musical instruments.

Bone glue is also used in the manufacture of ice flower glass due to its high adhesive properties and brittleness. When it dries, this characteristically shaped glass lump tears off the frosted glass surface, creating a decorative glass shape that has been used for centuries.

Bone glue is also used as part of the inhibitor system in the refining of copper to optimize the density of the cathodically deposited copper and to obtain a smooth surface.

Hide glue and rabbit glue are lighter in color than bone glue and the glue joint is more elastic. In the match producing exclusively hide glue high quality is used as a binder used and fuel for firing heads. Skin and rabbit glue are used in paper processing, especially in bookbinding and the restoration of old books. Hide glue, usually mixed with sugar , was used for a long time as a gum for z. B. Postage stamps in use. The dried hide glue, wetted with saliva, made it possible to stick the marks (mouth glue) on. The elasticity makes hide and rabbit glue suitable for priming flexible painting grounds (e.g. canvas ) as well as for gilding for chalk grounds , poliment and printing compounds. Heavily diluted hide glue is used in musical instrument construction as a primer for paints to be applied to wood. When building a composite bow, hide glue was used in many parts of the world to apply the so-called tendon coating to the side of the bow facing away from the archer.

Isinglass is made from the skin and bones of fish and can also serve as a binder for various colors.

Since fish proteins do not set even at low temperatures, this glue is liquid up to approx. 4 ° C and easy to process. Therefore, no heating is necessary for processing. Due to its reversibility and cold workability, this glue is used to restore furniture and other cultural assets.

For particularly demanding work is Hausenblasenleim used a special isinglass from the isinglass (the swim bladder of the beluga sturgeon ). Its adhesive strength is particularly high. It also serves as a bonding agent for shiny gold plating behind glass.

Glutine glue delays the setting of plaster of paris , which enables a longer processing time. This property and the increased strength of the hardened plaster are used in stucco work .

Bristle brushes, soaked with glue and then dried, can be sanded to a desired shape with sandpaper. For use, the glue can be loosened and washed out with hot water. According to the experience of the user, the color of the glue has no influence on the bond strength. In general, light-colored glues are preferred to darker types (probably also for aesthetic reasons).

Manufacture of the glues

Bone glue is obtained from the bones of a wide variety of animals. The bones of farm animals predominate, such as B. pigs, cattle, sheep and horses.

Isinglass is made from fish waste, isinglass glue from Hausen's swim bladders . Isinglass glue is very expensive due to the limited catch quotas for these animals.

The raw material is degreased and demineralized. Continuous boiling dissolves the collagens in the raw material and converts into glutin when water is absorbed . The yield is relatively low. The raw glue is evaporated and dried. The glue is sold in the form of plates, leaves, beads or as a coarse-grained powder.

About the same amount of water is poured over the dry glue. It absorbs the water within a few hours and swells. The swollen glue is then brought to a temperature of 50-65 ° C. in a water bath and, if necessary, adjusted to its desired viscosity by adding water . The aim is to achieve a viscosity that corresponds to that of syrup or thin honey . Cooled glue can be reheated and used again later. Stored in a cool and dry place, dry glue can be used and stored almost indefinitely.

Cooled glue residues should be kept cool (e.g. in the refrigerator ), but not frozen. The mold and other decomposition can thus be delayed. A small addition of ascorbic acid or salicylic acid , a few drops of clove oil or spiked lavender oil have a preservative effect. The addition of potassium dichromate (poisonous) makes glutine glue water-resistant after prolonged exposure to light. Adding formaldehyde (poisonous) or other substances with a tanning effect such as 10% alum based on the dry weight makes bone glue waterproof after hardening. Additions of polyhydric alcohols , sugars and glycerine modify the elasticity. The addition of 5% concentrated acetic acid makes the glue workable longer, even at lower temperatures.

Temperatures above 65 ° C destroy the glue by decomposing the glutin. Processing temperatures that are too low reduce the glue strength due to the loss of adhesion.

Devices and device parts made of iron and non-ferrous metals can discolor the glue and have a negative impact on the adhesive strength. Vessels should therefore be made of glass , porcelain or stainless steel . Glue brushes should have clamps made of stainless steel or aluminum or be bound without metal.

For all gluing, a good form fit of the work pieces to be glued must be ensured. Experience shows that pressing is only necessary for approx. 30 minutes. Thereafter, the glue joints should not be subjected to any greater stress for 24 hours.

The term hot glue is misleading for glue glue. Synthetic adhesives based on plastics (thermoplastics, hot melt adhesives ) with a melting point between 80 and 200 ° C are referred to as hot glue or hot glue . When cold glue , a white colored dispersion glue is white glue based on polyvinyl acetate denoted by water as solvent.

Advantages and disadvantages of glue glue

The adhesive strength of Glutin glue is extremely high. The sizing is reversible, i.e. H. With the addition of heat and moisture, it can be opened again without damaging the workpieces. Aged glues can usually be loosened very quickly by wetting them with alcohol, which embrittles the glue and leads to a solution. This is important when building and restoring musical instruments.

The disadvantage is the short processing time of the hot glue outside the water bath. Applied to the workpieces to be glued, the glue cools down very quickly, begins to gel and a durable glue connection cannot be made. The prerequisite for perfect gluing is therefore quick work and, in particular, uniform, continuous heating of the workpieces. Until the beginning of the 20th century, a large-scale glue furnace was usually part of the equipment in carpentry workshops; on this, all the wooden parts to be glued were heated to such an extent that the glue did not gel before the workpieces were pressed. Zinc plates heated in these ovens liquefied the previously applied glowing glue when veneering large furniture parts, thus enabling perfect gluing. The even heating of surfaces to be glued is best achieved today on electrically heated hot plates, less evenly using a hot air blower (or hair dryer ).

When gluing felt or leather on wood, for example in piano construction, the short processing time and fast setting are advantageous for quick work.

Isinglass can also be processed cold. The open time is several minutes, but the workpieces should ideally be pressed together with clamps for 24 hours.

In a humid and warm environment, glue can go moldy and is then attacked by pests and decomposed.

Historical notes on glue production and use

References to the use of glue already exist in ancient Egypt . There you found not only glued pieces of furniture, but also inscriptions and residual glue. There are also murals that show the use of glue in carpentry workshops. B. in the tomb of the Prefect Rekhmara of Thebes (approx. 1475 BC) or in the tomb of Nebanon and Ipuki (supervisor of the sculptors Thebes).

The Greeks used glue in the early days. It is unclear whether they developed the glue-making process themselves or whether they were adopted by the Egyptians. Already Homer mentions the use of glue in his poems. The Greek philosopher Theophrast (371–286 BC) later wrote of the glueing of wood in his history of plants . Of course, the many vase pictures also testify to the skill of the Greek carpenters.

The Romans used the same types of glue as the Greeks, which was probably a consequence of the Roman conquest of Greece. In his natural history , Pliny the Elder speaks of different types of glue and their production.

There are manuscripts from the Middle Ages that tell of the glue production, for example a manuscript by the Benedictine monk Theophilus Presbyter from the 11th / 12th. Century entitled Demolition of Various Arts .

The production methods of the glue refined in the course of time (e.g. the invention of the glue pot in a temperature-regulating water bath or the improvement of the recipes and production processes ( Friedrich Seltsam )) and are used up to the present day.

When bookbinding was well into animal glue used in the 20th century; keeping it in a warm water bath gave bookbinderies a characteristic odor. In the meantime this has been replaced by various quick-drying glues (plastic dispersion glues). Glutine glue is still of great importance in musical instrument making (string instrument, piano and organ building), in violin making bone glue is almost exclusively used to this day.

You can tell that the production of glue was a tedious job by the saying “He works like a glue boiler” for someone who takes too much time for his work. In the southern German-speaking area ( Bavaria and Austria ), the abuse of Leimsieder (Loamsiada) refers to a boring or mentally slow person.