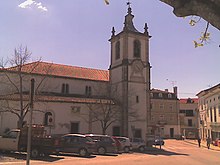 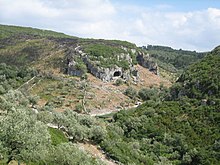 At the time of the Roman occupation, Conimbriga was a major city in the province of Lusitania , but not of particular national importance. After the Suebi invaded here in the 5th century , the Arabs conquered the area in the 8th century . During the 7th / 8th In the 19th century, the inhabitants of Conimbriga left their city and founded Condeixa, today's Condeixa-a-Velha (German roughly: Old Condeixa). In the course of the Reconquista , D.Afonso Henriques conquered the area and handed it over to the Santa Cruz Monastery in Coimbra . The monks then founded Condeixa-a-Nova (English: New Condeixa). The first official mention of Condeixa-a-Nova comes from 1219.

King Manuel I granted the place city rights ( Foral ) for the first time in 1514 and elevated it to Vila (small town). In 1541 it became its own community. In the course of the Napoleonic Wars on the Iberian Peninsula , the place suffered severe destruction by French troops in 1811 and fell into disrepair. With the victory of the Liberal Revolution in Portugal in 1822, the place began to grow again. In 1838, Condeixa-a-Nova became an independent circle, at the request of Queen Maria II , and in 1845 it was raised again to Vila .

Condeixa-a-Nova is the seat of a district of the same name. The neighboring areas are (starting clockwise in the north): Coimbra , Miranda do Corvo , Penela , Soure and Montemor-o-Velho .

The following municipalities ( Freguesias ) are in the Condeixa-a-Nova district:

Condeixa-a-Nova is located on the A1 motorway (with its own exit) and the IC2 and IC3 thoroughfares. The nearest train stops are in Taveiro, 11 km away, and Soure, 13 km away .

Partial view of the Conimbriga excavations 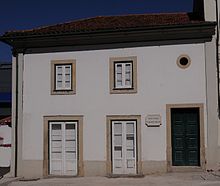 With Conimbriga most important Portuguese archaeological site of the Roman occupation in the county Condeixa-a-Nova is located.

A range of plants and animals can be seen in the Paul de Arzila Wetland , a nature reserve with a visitor center, nature trails and guided walks, including otters , migratory birds and species of herons .

Among the almost 97 registered monuments of the community are mansions , fountains, historical public and private buildings as well as various sacred buildings , such as the single-nave main church with two side chapels and elements of Manueline , Renaissance and classicism , the Igreja Paroquial , built around 1517 de Condeixa-a-Nova (also Igreja de Santa Cristina ).