This article is about the Portuguese city of Góis. For further meanings see Gois .

Góis is a vila (small town) in Portugal . It is the seat of the eponymous district ( concelho ) and the eponymous municipality ( Freguesia ), in the district of Coimbra .

The place is about 45 km east of the district capital Coimbra , on the edge of the Serra da Lousã , a foothill of the Iberian Scheidegebirge .

The municipality of Góis, 1910

In 1912 the Monte Redondo hydropower plant was built on the Rio Ceira to supply electricity for a paper mill. Góis became the first district in the Coimbra district with a nationwide electricity supply. With the start of the armament efforts at the end of the 1930s, in the run-up to the Second World War , the tungsten mined here gave the town a further boost. After the end of the war, however, tungsten production came to a standstill. In 1950 the paper mill supplied the entire Góis district with its hydroelectric power station.

After the Carnation Revolution in 1974 and the further increase in energy consumption, EDP took over the local power grid from the paper mill, which ceased operations in 1992 and also gave up its power generation concession from Monte Redondo , which ran until 2002, to a private operator.

In Góis there are 32 listed buildings, including a number of fountains, mansions , former public buildings, and various churches, such as the Igreja Paroquial de Góis (parish church). Originally built in the 15th century, the church, officially called Igreja de Santa Maria Maior (English: Church of St. Mary the Greater), was rebuilt several times, and today it bears u. a. Gothic and Manueline elements. In addition, the Renaissance bridge from the 15th century, which is often called “Romanesque” or “Roman” , is also a listed building, as is the historical center of Góis as a whole.

In the municipality there are a number of old villages in traditional slate construction, including four of the 27 historical slate villages of the Aldeias do Xisto , namely Aigra Nova , Aigra Velha , Comareira , and Pena . Various themed hiking trails lead along them through the wooded, often almost untouched nature.

Góis is the seat of a district of the same name. The neighboring areas are (starting clockwise in the north): Arganil , Pampilhosa da Serra , Pedrógão Grande , Castanheira de Pêra , Lousã and Vila Nova de Poiares .

With the territorial reform in September 2013, the municipalities ( Freguesias ) Cadafaz and Colmeal were combined to form the new municipality União das Freguesias de Cadafaz e Colmeal . Since then, the district has consisted of the following four municipalities: 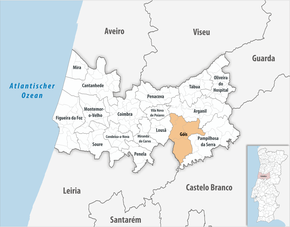