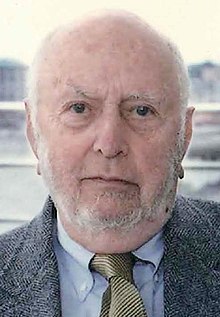 Douglass Cecil North (* 5. November 1920 in Cambridge , Massachusetts ; † 23. November 2015 in Benzonia , Michigan ) was a US -American economist and economic historian . In 1993 he and Robert William Fogel received the Swedish Reichsbank's Economics Prize in memory of Alfred Nobel for their renewal of economic history research by applying economic theory and quantitative methods ( cliometry ) to explain economic and institutional change. At the same time, Douglass North's analyzes of institutional change questioned an important cornerstone of classical and neoclassical economic theories - namely the theory of rational decision-making .

Douglass C. North was born in Cambridge, Massachusetts in 1920 to a life insurance manager and grew up in Ottawa , Lausanne , New York and Connecticut . After his family moved to San Francisco , North studied political science , philosophy, and economics at the University of California (Berkeley) . In 1942 he completed his studies with a Bachelor of Arts and joined the US merchant navy as a declared opponent of war (for the transport of troops and equipment). From 1944 until he left in 1946, he taught astronomical navigation at the Naval School in Alameda .

After returning to Berkeley, he received his PhD in 1952 on the history of life insurance in the United States. According to North's statements, his economic history supervisors were rather skeptical of economic theory , so that he only met it more closely in contact with colleagues at the University of Washington ( Seattle ), where he got his first teaching position.

After his first article in the Journal of Political Economy on regional economics and economic growth ( Location Theory and Regional Economic Growth , JPE vol. 63, no. 3, 1955, pp. 243-258), he received the opportunity at the National Bureau of Research Institute in 1956-57 Economic Research (NBER) , where he mainly dealt with empirical research on the balance of payments in the United States between 1790 and 1860, which he expanded over the next ten years into the book The Economic Growth of the United States from 1790 to 1860 . Since the early 1960s, North was one of the pioneers of cliometry , the application of economic theory and quantitative-statistical methods to objects of study in economic history. During a year abroad in Geneva in 1966/67 he turned more to European economic history. Since then he has focused on researching the social structural changes that accompany economic developments or that influence and enable them. During this work he developed his theory of institutional change bit by bit , which increasingly turned away from the efficiency and rationality paradigm of the neoclassical view of institutions. North helped New Institutional Economics gain more recognition in economics.

In 1983 he moved from the University of Washington to the law and economics faculty at Washington University in St. Louis , where he was director of the Center for Political Economy from 1984 to 1990 . The American Academy of Arts and Sciences accepted him as a member in 1987. In 1992 he was the first economic historian ever to receive one of the most important awards for economists, the John R. Commons Prize , which was established in 1965 by the International Honors Society in Economics (meaning: International Society for Awards in Economics). Since 1996 he has been a corresponding member of the British Academy . His later research interests covered property rights , transaction costs , economic organization in history, institutions and economic development in developing countries .

North served as an expert on the Copenhagen Consensus of the Copenhagen Business School . North had been married for a second time since 1972. His first marriage resulted in three sons born between 1951 and 1957.