An algebraic structure, or a (general) algebra for short, is a structure (first level) that is only defined by one or more links (as functions , links are special relations).

Structures with an internal link: groups and the like 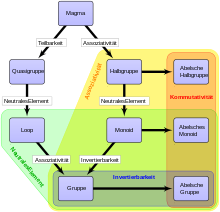 A hierarchical compilation of the basic algebraic structures

The fundamental algebraic structures have one or two two- digit internal connections . The taxonomy , i.e. the classification of these structures, depends on which of the following group axioms apply in the set with regard to the link :

(N) existence of a neutral element :

(I) existence of an inverse element :

The following structures with a two-digit inner link generalize or specialize the fundamental notion of group:

Structures with two internal links: rings, bodies and the like

The following structures have two interconnections, usually written as addition and multiplication; these structures are of the speed ranges (such as , , ) abstracted, which is usually considered. The compatibility of the multiplicative with the additive combination is ensured by the following axioms:

Further axioms that apply to both connections are:

(U) The neutral elements relating to addition and multiplication, and , are not the same.

(T) a zero divisor freedom : If the identity element of the additive referred to link, then it follows from all of that or applies.

(I * ) For every element, with the exception of the neutral element of the additive link, there is the inverse element with regard to the multiplicative link. Formal: .

Structures with two internal links: lattices, set algebras and the like

A lattice is an algebraic structure, the two internal connections of which in the general case cannot be understood as addition and multiplication:

(V) Laws of Merger (also called Laws of Absorption): and .

With this axiom we get as structures:

In a distributive union one only has to demand one of the two merging laws; the other follows from the distributive law.

A Boolean algebra is an association in which the two links each have a neutral element, and , and in which each element a with respect to both links matching complement has

(C) Existence of a complement: for each there is one for which applies and .

Note that the complement is not an inverse element, as it provides the neutral element of the other link.

Structures with internal and external connections: vector spaces and the like

(AL) associative law: for from and out of true .

(DL) distributive laws: for out and out applies and .

This gives us the following structures in the notation ( | | Compatibility axioms):

The inner connections of scalar product and norm introduced in the following help a vector space (this can in particular also be a body to be understood as a vector space) to a topological structure.

An order structure is a structure (first level) that is equipped with an order relation , i. that is, it is a relational structure or, for short, a relative .

The geometric concept of distance (the metric ) makes it possible to use the basic concept of modern analysis , convergence , in metric spaces . Topological spaces have emerged from an effort to treat convergence in a general sense (each metric space is a topological space with the topology induced by the metric). The different topological spaces, they can be with their possible local structures classify , retain their structure by the award of certain subsets as open or, equivalent to a complete (structures the second stage).

A geometric structure is expressed through properties such as the congruence of figures. Their classification according to the valid axioms (compare the articles Geometry , Euclidean Geometry , Euclid's Elements ):

Their classification according to the transformation groups under which certain geometric properties remain invariant ( Felix Klein , Erlanger program ):

Number ranges are the amounts that are usually expected. The basis is the set of natural numbers. Addition and multiplication serve as algebraic connections. By requiring that the inverse operations subtraction and division should always be possible, one extends the set of natural numbers to the set of whole numbers and to the set of all fractions. The real numbers are introduced as limit values ​​for number sequences; they allow (among other things) the extraction of the square root of any positive numbers. The roots of negative numbers lead to the complex numbers.