A relation ( Latin relatio "relationship", "relationship") is generally a relationship that can exist between things. Relations in the sense of mathematics are exclusively those relationships for which it is always clear whether they exist or not; Objects cannot be related to one another “to a certain extent”. This enables a simple set- theoretical definition of the term: A relation is a set of tuples . Things that are related to one another form tuples that are elements of .

Unless expressly stated otherwise, a relation is generally understood to be a two-digit or binary relation . In such a relationship, then two elements form and an ordered pair originate and from different base levels and is the name of the relation heterogeneous or "relation between the amounts and ." If the basic quantities match ( ), then that means the relation homogeneously or "Relation in or on the crowd . "

Important special cases , for example equivalence relations and order relations , are relations on a set.

Today, some authors consider the term relation not necessarily as to amounts limited to but let each consisting of ordered pairs class are considered relation.

Sometimes, however, this definition is not precise enough and referring the source and target quantity in the definition of a, above is then subset of the graph (more rarely Count ) called the relation. A two-digit relation is then defined as a triple

The archetype, argument or definition or pre-range of a given two-digit relation is understood as the smallest possible pre-range to the graph , the elements of which all appear in the ordered pairs of actually on the left side, in signs

The set of values, values or image or after- area in this sense denotes the smallest after-area for a given , whose elements all appear in the pairs from on the right-hand side, in characters

Sometimes the term field (or node set ) is used for the union set , in characters

In addition, the following designations can be found:

More generally, a -digit relation is a subset of the Cartesian product of sets

Here denotes the finite sequence of the sets, and the Cartesian product.

The amounts of hot carriers amounts of relation with the minimum support amounts to the graph , namely

The field of a -digit relation is given by

Substantial equality is defined in the same way as for two-digit relations by the correspondence of the graphs, in particular every -digit relation is essentially the same with and with the homogeneous relation .

A one- digit relation on a set is therefore simply a subset , in the detailed definition with .

The zero-digit relations are therefore the subsets of the empty Cartesian product or , that is, and , detailed and .

Relations between or on real classes

Often the carrier areas of a relation are not sets, but real classes , one then speaks of class relations . Occasionally one can avoid the set-theoretic problems that result from this by only looking at the graph of the corresponding relation. The (minimum) carrier quantities ( in the two-digit case definition and value set ) are actually quantities, but it is not necessary to specify the source quantity, target quantity,  ... ( ) from the outset if the relations are essentially the same. Not always it is possible, for example for the equivalence relation of equal thickness , see also: cardinal numbers §Definition . Essentially equality of relations is another example.

A two-digit class relation with source class and target class is called small predecessor if the class of the predecessor (archetype fiber of , see below) is a set (i.e. not a real class) for all . The relation is called English right-narrow (German about successor small ), if for all the class of the successor (image fiber of ) is a lot. In the case of right uniqueness (partial mappings, mappings, see below), a class relation is always small, since there is one image value for every archetype (exactly or at most), i.e. the class of the successors is a set of ones (or the empty set ). Every injective class mapping is both small and predecessor small. The inclusion relation is small for each class , since they can not be real classes, but are sets and are therefore also a set. The terms predecessor and successor themselves are usually used in the context of order relations, see order relation §Predecessor and successor .

The Cartesian product of two sets and is the set of all ordered pairs of and where any element from the set and one from represents. In the ordered pair, the order is important; H. differs from in contrast to the disordered pair, which is identical to For , is also written to make it clear that there is that relationship between the objects (as in ). The empty set as a subset of the Cartesian set product understood as a relation is called the zero relation , the full product is called the all relation (also known as universal relation ) (also referred to as ).

In all cases (or if the detailed definition is used).

The following applies to functions and multi-functions:

In the more detailed definition , because it is clearly determined by (left total), it can also be omitted and taken more simply .

The following applies to functions and partial functions:

For or is also written (English: maplet ), or .

The forward chaining of two two-digit relations is defined as follows:

Chaining in the reverse order is called backward chaining :

Some authors (W. v. O. Quine) use the notation for this as an alternative .

The sequence for backward chaining is the same as for chaining functions (which can be seen as special relations).

The concatenation of two-digit relations is also known as a relative product . In the concatenation, the simplest relation that contained in each Cartesian product can empty relation ( empty set ) occur, namely, when and disjoint are in symbols .

Example: The relation “being sister-in-law of” is the union

Occasionally, the term transposed relation is also used for this , in characters .

The generalization of the inverse relation (converse) to -sign relations is the permutation of the coordinates of the -tuples it contains , special

both examples of ( cyclic ) self-inverse permutations .

Let be a permutation (i.e. a bijective mapping of to itself) and be a --place relation, then the relation resulting after applying the permutation is (one understands as a family ). In the case of mirroring

Occasionally the designation (sic!) Is also found for this , often also with square brackets as noted. In correspondence of a for the image fiber of an amount (Singleton) , the notation is what partially also uses the bracket notation in use, i. H. ; in the case of symmetrical relations, d. H. (possibly partial) equivalence or compatibility relations is the notation and speaks of equivalence or compatibility or tolerance classes.

Relations can be restricted in various ways to subsets of the carrier sets, for more information see Restricting a relation .

analogous for -digit relations for fixed support areas . For example, on the real numbers , the complementary relation to is .

If the complex notation is used, then is

where there are no longer any external additions, but components of the relation; analogous for -digit relations in this notation.

As for all sets, the complement is also involutive for relations:

Alternative notations for the diagonal are or ; if already known, it is simply referred to as , or .

Another special homogeneous relation is the all relation or universal relation

(also referred to as Nabla as ).

If it is already known, the index is omitted here as in the case of the identity relation.

The all relation plays a role in graph theory (see below). An example of use is the following sentence:

Is a directed graph with a lot of corners and a (associated) relationship of edges, it is then exactly coherent (strong) when the reflexive transitive closure of the Universal relation.

In extension of the notation instead of for the inverse relation, one denotes its powers with negative exponents:

This means that any whole numbers are allowed as exponents.

In addition, every monoid has homogeneous relations with the empty relation ( zero relation )

The relations arise through the union of the different powers

Taken together, the two-digit relations on a set form a relation algebra

Together with the restrictions, the homogeneous relations form a ( heterogeneous ) Peirce algebra .

Homogeneous multi-digit relations are (with their graph) subsets of . For solid the all relation (also ) and the identity relation (diagonal) (also ) are given by

The application of permutations to their -tuples, described as a generalization of the formation of conversions, is of particular importance here, since in this way one always remains within the subsets of (closeness). M. a. W. These operations are bijective mappings in . Other terms known from two-digit relations, such as reflexivity and symmetry, etc., can be canonically (naturally) extended to any multi-digit relations.

Graph theory describes sets with a relation to them together with certain generalizations under a common generic term, the graph . The cases considered in graph theory are (unless otherwise stated) usually finite.

2. Symmetric graphs , i.e. H. Sets with a symmetrical relation are equivalent to an undirected graph , whose edge set consists of (undirected) edges, namely the (disordered) sets with (here equivalent to ).

3. Further generalizations concern so-called directed graphs with combined multiple edges , in which each edge has a natural number as multiplicity. The edges of such graphs can be represented by a multiset : a map with a set and a map that assigns a positive number called a color to each node . Graphs with colored nodes and / or edges are similar .

4. Of weighted nodes and / or edges: We speak of weights instead of colors when the mapping is real-valued. In Node Weighted this corresponds to a fuzzy set , wherein is a real valued multiset . The same applies to weighted edges. For oriented graphs this means in particular that the set of edges (a relation, i.e. set of ordered pairs of nodes) becomes a multi-set or fuzzy set in an extension of the relation concept.

Overview of the properties

The following relations are important for functions (represented as special relations). In general, here the relationship between two different amounts of the case is also possible.

Overview of functional properties for relations

A relation is therefore a (total) function if and only if it is left total and right unambiguous. This means that every element in A has exactly one partner in B. The properties surjective, injective and bijective are usually used for functions and specify certain additional properties. For example, a function (and any relation) is bijective if and only if it is surjective and injective, i.e. if its inverse relation is a function.

A mapping or function is also called

The following relationships apply between the properties: 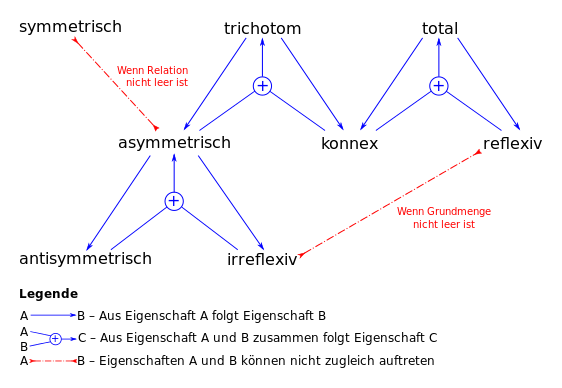 The following relationships exist between the properties of a relation and those of its complement : 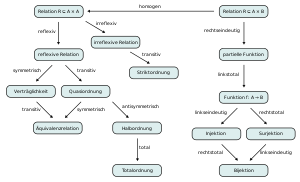 Other important classes of relations and their properties:

In elementary mathematics there are three basic comparative relations:

Two real numbers are always in exactly one of these relationships. With these relation symbols, others can also be formed. The following applies:

The above order relations do not exist for complex numbers .

Mathematicians also use the sign ≤ for abstract order relations (and ≥ for the associated inverse relation) while “<” is not an order relation in the sense of the mathematical definition.

For equivalence relations , “symmetrical” symbols such as ≈, ~, ≡ are preferred.

For any half-ring with zero element and one element , the following is a category :

This is identical to the Kronecker delta : .

The morphisms are set-indexed matrices and their composition happens as with matrix multiplication , corresponds to the unit matrix .

In special cases , d. i.e., is the category of relations.

Operations on whole relations are examined in relational algebra . In computer science , relationships are important when working with relational databases .