If there is a set and a two-digit relation , then it is called intransitive if: 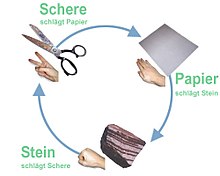 The figures of scissors, stone, paper