The Condorcet paradox or problem of cyclical majorities (also electoral paradox, circle preference or Ching-Chang-Chong principle ) is a paradox in electoral procedures named after Marie Jean Antoine Nicolas Caritat, Marquis de Condorcet , which is particularly evident in paired votes and elections ( Condorcet method ). The so-called paradox is the following: the voting result or the collective preference / decision is cyclical, i. H. not transitive , although the individual preferences are transitive. This can be interpreted in such a way that, in an agenda, every majority decision is replaced by another. It can be concluded from this that there is no Condorcet winner .

This is possible because each voter has his own sequence of preferences. If, however, the options are divided into two opposing camps, whose options are only weaker or stronger in this direction, this phenomenon does not occur. 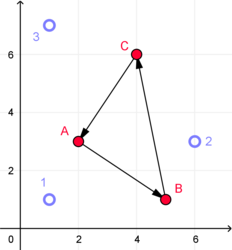 In formal notation the preferences:

Of course, this also applies if x, y and z represent not only one person each, but (approximately) groups of the same size. More precisely, each group just has to be smaller than the other two combined.

The result therefore depends on the voting leader and his choice of the sequence of the voting processes: the above situation is given and it is known to the voting leader. Then, if he himself prefers alternative A, he can first vote between B and C: B wins here. With this, he declares C eliminated and lets A and B vote, where A now wins. It now looks as if an overwhelming majority is behind A, after all, it has clearly triumphed over B and B clearly over C. A vote between A and C, which would have shown that the preference is by no means clear, did not take place.

The social choice theory examines the voting paradox and other aggregation problems with voting and elections. The voting paradox is a simple example that of several individual transitive preference lists without arbitrary preference not always transitive collective preference lists can create. In particular, it is a special case of Arrow's impossibility theorem , which proves the fundamental impossibility of an ever-present “democratic” collective preference list. This raises some questions in democratic theory ; in particular, some believe that it shows that democratizing economic or political decisions does not always lead to optimal results. But how often do circular preferences appear?

Let's replace the abstract variables in the table with concrete options in a factual decision: A committee with 3 members ( X aver, Y oshi, Z elda) advises on the speed limit on a street.

Let's read the table: Xaver is most likely to want the lower speed and least of all the higher. Yoshi is most likely to want the current compromise. Zelda is most likely to like the highest speed, secondly she likes the lowest speed. Panel member Zelda's preferences are strange. It can always happen that the preferences are not transitive. One could now think that circular majorities practically do not appear in one-dimensional decisions. But that's wrong. For example, Zelda could think that she realized that it is easier to brake at low speed, and that at high speed a hormone would be released that would increase alertness. There may also be a group of traffic lights on the road, and the green phases can only be used at higher or lower speeds. Only at normal speed is there no advantage. It follows that cyclical preferences are entirely possible.

Condorcet was probably the first to describe this paradox in his Essai sur l'application de l'analysis à la probabilité des décisions rendues à la pluralité des voix (Paris 1785). It was practically forgotten until Charles Lutwidge Dodgson and Edward John Nanson independently rediscovered it in the 1870s. It was then forgotten again until Duncan Black and Kenneth Arrow independently rediscovered it in their investigations in the 1940s.