This article describes holomorphism as a property of functions. For another meaning, see holomorphism of a group . 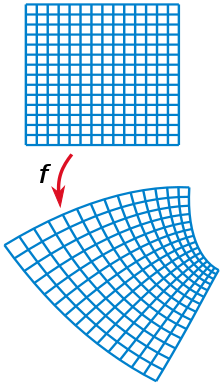 Holomorphism (from Gr. Ὅλος holos, "whole" and μορφή morphic, "form") is a property of certain complex-valued functions that are treated in function theory (a branch of mathematics ). A function with an open set is called holomorphic if it is differentiable from complex at every point . Such functions are also called regular in older literature in particular .

Even if the definition is analogous to real differentiability, function theory shows that holomorphism is a very strong property. Namely, it produces a multitude of phenomena that have no real counterpart. For example, every holomorphic function can be (continuously) differentiable as often as desired and can be expanded locally into a power series at every point .

Let it be an open subset of the complex plane and a point of this subset. A function is called complex differentiable in the point , if the limit value

exists. It is then referred to as .

The function is holomorphic in point , if an environment of exists in is complex differentiable. If it is completely holomorphic, it is called holomorphic. If further , then one calls a whole function .

Relationship between complex and real differentiability

is in a natural way a two-dimensional real vector space with the canonical base and so one can examine a function on an open set for its total differentiability in the sense of the multi-dimensional real analysis . As is well known, (total) means differentiable in if there is a -linear mapping such that

holds, where a function with

is. Now you can see that the function is precisely differentiable in complex if it is totally differentiable there and is even linear. The latter is a strong condition. It means that the representation matrix of with respect to the canonical base has the form

If one breaks down a function into its real and imaginary parts with real functions , the total derivative has the Jacobi matrix as the representation matrix

Equivalent properties of holomorphic functions of a variable

In an environment of a complex number, the following properties of complex functions are equivalent:

In none of them are complex differentiable and therefore nowhere holomorphic, for example

The function is only complex differentiable at that point , but not holomorphic there, since it cannot be differentiated in a whole environment of complex.

Are complex differentiable at one point , so too , and . This also applies if there is no zero of . There are also rules of sums , products , quotients and chains .

The following is a list of fundamental properties of holomorphic functions, none of which have any equivalent in real theory. As a result, let it be an area and holomorphic.

If simply connected and a cycle is in , then Cauchy's integral theorem applies

So the theorem is especially valid if there is a star region and a closed path .

Let be the open circular disk with radius around the point . If the conclusion of is still entirely in , then Cauchy's integral formula applies to all and

The value of the function (and each of its derivatives) of a point in an area depends only on the function values ​​at the edge of this area.

It turns out that a holomorphic function is uniquely determined by very little information. The identity theorem says that two holomorphic functions in one domain are completely identical if they agree on a suitable real subset . The correspondence set does not even have to be a continuous path : it is sufficient for it to have an accumulation point in . Discrete subsets , however, are not sufficient for this.

From the point of view of category theory , a biholomorphic map is an isomorphism .

Be an open subset. A mapping is called holomorphic if it can be expanded into a power series around every point of the domain, that is, there is a polycircle for each , so that

holds for all with coefficients independent of . A function is called holomorphic in the -th variable if it is holomorphic as a function of the remaining variables that are fixed. Holomorphic functions are of course holomorphic in every variable. For the converse, see the equivalent characterizations below.

With the Wirtinger calculus and a calculus is available with which the partial derivatives of a complex function can be treated as with the functions of a variable.

For a function , open, the following statements are equivalent:

For several dimensions in the image area, holomorphism is defined as follows: A mapping , open, is called holomorphic if each of the sub-functions is holomorphic.