The title of this article is ambiguous. Further meanings are listed under Chessboard (disambiguation) .
Diagram of a chess board with names of the rows and lines

A chess board is a game board used in the game of chess and checkers . It is also used in a few other games.

It is two-tone and square and also consists of square fields, the color of which alternates in both the horizontal and vertical directions, thus forming a geometric pattern also known as a checkerboard pattern .

In its standard form it consists of 64 fields, arranged in eight horizontal rows and eight vertical lines , which have a light or dark color and are traditionally referred to as white and black fields. Furthermore, in the standard form, the rows are often labeled with the numbers from 1 to 8 and the lines with the letters from a to h . In the game of chess, from the perspective of a player, the first row is called his / her back row .

The black and the white basic row

A chessboard is square and in turn divided into alternately 32 dark and 32 light, square fields on which the pieces are placed and moved. The color is not fixed, dark brown to black or white to light brown or ivory field colors are common - depending on the material and processing.

The 64 fields are arranged in eight horizontal rows and eight vertical lines so that the lines are aimed at the opponent. During the game, the chessboard is placed between the two players sitting opposite each other in such a way that - as seen from the players - there is a light-colored field on the right in the first row.

In chess notation , the rows are denoted by numbers, the lines by letters. Seen from the player with the white chess pieces, the rows are given the numbers from 1 to 8 and the lines from left to right the letters from a to h . The notation for checkers is different because the pawns only stand on the black squares.

Rows one and eight, those on which the pieces - apart from the pawns - are at the beginning of the game, are referred to as the white and black basic rows . 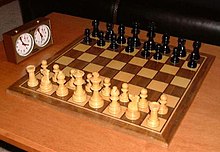 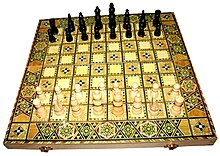 Chess box made of wood

The chessboard is the base on which the chess pieces , checkers etc. are placed and moved or moved during the game.

Chessboards can be made from a wide variety of materials: wood, cardboard, plastic, metal, stone, glass, foil or floor tiles and as a painted pattern on the floor. In chess clubs or at larger chess tournaments , thinner, foldable chess boards made of cardboard with a plastic cover are often used. They are space-saving and cheaper. Chess tarpaulins made of plastic serve the same purpose (similar to writing pads on desks).

Foldable chess boxes with the pieces inside are also widespread . Smaller cassettes, usually made of wood or plastic, are also known as travel chess boards. For a better and more stable position of the pieces, they are often designed as plug-in or magnetic chess games. This is also available in a (roofed) vertical version, as a stationary version in gardens and parks, where you can often play from two sides.

In health resorts and holiday resorts or in other public parks there are often "chess boards" made of square pavement slabs on which large wooden or plastic figures can be played.

The World Chess Federation FIDE recommends in its statutes also the material and size of chess boards. Chess boards should be made of wood, plastic, cardboard or cloth; in principle, chessboards made of stone, for example, are also allowed. The recommended side length of the individual fields is estimated at 5 to 6 cm. The size of the pieces used should be based on the chessboard or vice versa. Furthermore, the side length of the fields should be at least twice the foot diameter of a pawn piece. As a rule of thumb, the king should have a height of 8.5 to 10.5 cm.

Most tournament boards have rows of letters and numbers (a – h and 1–8, respectively) printed on the edges. This coordinate system allows the individual fields to be clearly identified; this is used to write down chess games .

Special boards are used in blind chess . There the dark fields are higher than the light ones and can therefore be felt. The pieces are inserted into the board for a better hold, the black pieces have a small metal ball at the top to distinguish them.

A special chess tournament takes place every year in Dresden, the "Porcelain Cup". In the final of the tournament, which is held in knockout mode, the two finalists play their games with figures and a board made from Dresden porcelain.

The so-called demonstration board is a special chess board that is not used for playing chess, but is used in a vertical position to demonstrate and analyze chess games .

The black and white chessboard is also the symbol of the music genre Ska .