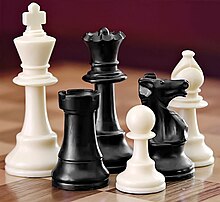 In the game of chess , both players each use a set of 16 pieces , which are called chess pieces . The two sentences are similar and only differ in their respective color. The colors are referred to as white and black , even if this is usually not literally true. For example, the "white" figures are often made of light wood and the "black" ones are made of dark wood .

The 16 chess pieces of a party are the king , the queen , two rooks , two bishops , two knights and eight pawns . This composition is a symbol of the court and army of traditional kingdoms . Because of the pawn promotion , additional pieces may be necessary in the course of a game (but rarely). A few sets of figures therefore contain a second lady in each color.

Both in the colloquial sense and in the official usage of the FIDE rules, the word figure refers to all chess pieces. In the traditional language of German-speaking chess players, however , the designation figure does not include the pawns, as these are fundamentally different from the other pieces. However, the term is often further restricted to the minor figures ; thus “winning figures” means conquering a bishop or jumper.

The individual pieces differ in the way they move. In the case of the five figures (in the traditional German sense), these are always rotational and mirror-symmetrical (“in all directions”) and there is no difference between pure movement and pulling. On the other hand, pawns can only move "forward" (in the direction of the opposing camp) and strike forward diagonally.

“Straight” means horizontal and vertical, “oblique” parallel to a diagonal .

When setting up the stones, the rule is that the lady comes to stand on a field of her color (“The lady loves her color”). Especially if there is no lettering, pay attention to the 90 ° orientation of the game board so that there is a white field in the front right corner.

In older chess literature and in game analyzes, all pieces except for pawns and kings are often referred to as officers . A distinction is made between:

In order to be able to compare the balance of power on both sides, the value that the pieces have according to experience is given in so-called pawn units . The approximate values ​​are:

Since the king cannot be beaten, he has no exchange value.

However, the value of a piece always depends on its current position. For chess programs in particular , it is therefore necessary to specify and adapt these values.

The figure shape commonly used today, called Staunton figures , was designed by Nathaniel Cook in 1849 . It was promoted by the then leading player Howard Staunton and subsequently got his name. In 1924 it was taken over by the World Chess Federation ( FIDE ) when it was founded. The design impresses with its clarity, restrained symbolism and its practicality. The worldwide success of these figures in the 20th century is due to their massiveness and uncomplicated production. The figures proposed in Germany from 1934 in the federal form design, again more simply designed and easier to manufacture, have not caught on internationally.

Historically, the appearance of the chess pieces reflects their cultural and social background more than it translates the rules of the game into its form. One famous historical design is represented by the Lewis chess pieces , believed to have been made in Norway in the 12th century.

Josef Hartwig (1880–1956) created a more abstract and symbolic form of the rules of movement with his figure design for the so-called Bauhaus chess game from 1923. The design, modified in 1924, is based on the basic forms of cube and ball .

Since the figure designations depend on the national language, figure symbols (figurine notation) are preferred in international publications. The names of the figures represent a feudal state around a royal couple in many languages. In some languages ​​they are understood as figures of an army (without a couple).