from Wikipedia, the free encyclopedia
This is the spotted version , flagged on June 2nd, 2020 . There is 1 pending change that has yet to be viewed.

In the basic position of a game of chess, each party has two knights. At the beginning of the game, the white king knight is on the g1 square, the black on g8; the white lady's knight on b1, the black on b8. The specialty of the knight is that it is the only chess piece to be able to "jump" over pieces.

Moving possibilities of a central or marginal jumper

The knight's move is always two squares horizontally from his starting square and then one square vertically or vice versa. The official FIDE description for this is as follows: The knight may move to one of the squares that are closest to his standing square, but not on the same row, line or diagonal with it.

With this knight jump the jumper is able to enter all fields of the board (see also the longest jumper path without crossings ), but some paths are time-consuming, for example the one from one side of the chessboard to the other. In the middle of the board, a knight can move to a maximum of eight other fields, on the edge of the board there are four and in one corner of the board only two fields (see graph).

With three pawn units, the value of a knight roughly corresponds to that of a bishop. Its actual strength always depends on the position on the board, so in closed positions it can be superior to the runner due to its special traction. The reverse is true for two jumpers compared to a pair of bishops ; both runners together are stronger than two jumpers in open positions.

A knight is usually good when he has many moves and is difficult to attack (see also eternal knight ). A proverb also says: "A jumper on the edge brings sorrow and shame."

Graph of all possible knight moves

Distance of all squares in knight moves and number of possible routes for a knight on d4.

The knight in the three phases of the game

In general, the rule of thumb is that you should develop the knights (as well as the bishops) as early as possible in the game. The natural development fields are f3 and c3 for white and f6 and c6 for black. From these fields they directly influence the central fields. Not quite as often, but still often, knights are positioned on the squares e2 or d2 or e7 or d7. There they are a little less active, but do not block the f or c pawns.

Quite often the jumpers are tied up by bishops in the opening, but rarely exchanged, because this would give up the pair of bishops.

In the middle game

The jumper is considered equal or superior to the runner, especially in closed positions. The closer he is to the center, the better he can develop his strength. It is particularly strong on so-called outpost fields, where it is covered by your own pawns, but can no longer be attacked by opposing pawns. On fields in front of a backward opposing pawn or in front of an Isolani, he also functions as an efficient blockade figure.

Because of his unusual move, a knight can attack all opposing pieces (except the knights) without being threatened by them. The tactical motif of the fork, which is especially used by jumpers, is based on this. With a fork, two opposing stones are attacked at the same time by one piece (e.g. by a knight). The "family chess" has a particularly devastating effect here, a knight's fork that threatens both king and queen and almost inevitably leads to the loss of a queen.

A well-known mate motif performed by the knight is the stifled mate . A lesser known matt motif is the dragonfly matt .

The game example is intended to illustrate how much the strength of a knight depends on where he is positioned on the chessboard.

The black knight on d3 is covered and obviously dominates the entire white position. At the same time, both white jumpers are standing on the edge and have no single legal opportunity to move that does not immediately lead to material loss. Although Karpov has an extra pawn with the white pieces, he is clearly worse positionally. It followed

The second jumper intervenes in the action.

In his desperation, White even gives his queen for the knight on d3.

One knight alone is not enough to checkmate. Even with two knights, checkmate cannot be forced, but only achieved if the opponent plays poorly. It is possible to mate with a knight and bishop. However, it requires precise play in order not to fail with the 50-move rule.

In endgames with pawns the knight is clearly inferior to the rook. The runner is about as strong as the jumper. Which figure prevails in a specific case depends on the respective position.

Although the knight's gait is quite unusual compared to the other chess pieces, he is one of the few whose gait has not changed in the course of chess history. Already in Chaturanga, India, he moves like he does today. In many chess variants in other countries there is also a piece that moves like or almost like a knight. In the Chinese Xiangqi , the field that borders orthogonally to the starting field and diagonally to the target field must be free, i.e. H. the Chinese knight cannot jump like in western chess. The (non-sponsored) horse in the Japanese Shogi draws (and jumps) as the western Springer, with the difference that it can only draw forward to a neighboring line and two rows forward. 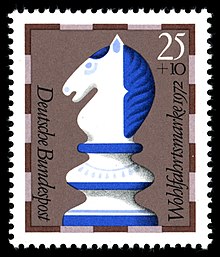 Springer on a 1972 welfare stamp designed by Heinz Schillinger

Knight jump puzzle. Following the jumper's gait and starting at the red marked field, the solution is: “Ma-de in Ger-ma-ny? The worm is in there. "

The knight problem is about finding a tour with a knight over the chessboard in which each field is entered exactly once. With a "perfect" solution, the jumper ends his path exactly one move away from the starting point, so that the tour could be continued almost indefinitely.

The knight jump puzzle makes use of the jumper's gait to arrange syllables, for example, in sentences following the knight jumps from which they are named.

Other types of jumpers

In historical chess variants and in fairy tale chess there are other types of knights with different steps. An overview can be found in the article (a, b) -Springer .