This article describes the local community Dörrenbach in Rhineland-Palatinate. For other meanings see Dörrenbach (disambiguation) . 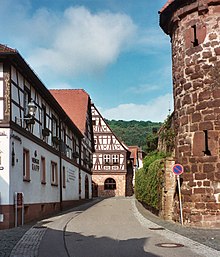 Dörrenbach ( Palatinate. Derrebach ) is a municipality in the southern Weinstrasse district in Rhineland-Palatinate . It belongs to the Bad Bergzabern community . It is popularly referred to as the “Sleeping Beauty of the Palatinate ”.

Dörrenbach is a state-approved resort and is located on the eastern edge of the Wasgau , as the southern part of the Palatinate Forest and the adjoining northern part of the Vosges are also called. This area is also part of the Upper Mundat Forest . The town center is located in front of the drop to the Upper Rhine Plain at an altitude of 295  m above sea level. NHN in a valley. The east of the district is part of the Haardtrand , alternatively known as the Weinstrasse region . Dörrenbach also includes the Am Springberg, Heyhof and Kirschbüschelhof residential areas . Neighboring communities are - clockwise - Bad Bergzabern , Kapellen-Drusweiler , Oberotterbach , Böllenborn and Birkenhördt .

The name- giving Dörrenbach rises on the eastern edge of the settlement, flows to the east and partly the boundary to Bad Bergzabern. The Dierbach rises directly on the boundary to Oberotterbach and continues this eastward for several kilometers. In the far north-west, the district extends as far as the Böllenborn , which in this area represents the border to the local community of the same name.

For the first time in 992 the village is mentioned as Turrenbach in a deed of donation, according to which it was given by King Otto III. was handed over to the Seltz Monastery in Alsace on March 11th, together with the goods from Oberotterbach and Niederotterbach . The name, which means a place on a dried up brook, later became Dorrenbach , Thurrenbach , Derrenbach and since the 19th century as in the present day Dörrenbach .

From the beginning of the 12th century to the end of the 13th century, Dörrenbach was part of the Upper Community of the Guttenberg rule and thus Staufer Reichsgut . The Counts of Leiningen were initially the sole feudal lords of the Guttenburg estate and thus also the Lords of Dörrenbach, but from 1379 to 1463 only three-quarters and the Electoral Palatinate a quarter. Since 1463 the place belonged to Pfalz-Zweibrücken , which in 1410 already had the electoral Palatinate part. After the castle was destroyed in the Peasants' War in 1525, Guttenberg's official seat was relocated to the Minfeld Castle and the high court to the fortified churchyard in Dörrenbach.

From 1680 France was sovereign over Pfalz-Zweibrücken with Guttenburger Land and thus also over Dörrenbach. In 1789 French revolutionary troops occupied the place, which was incorporated into France with the Peace of Luneville in 1801.

From then on, the municipality was part of the French Republic , then part of the Napoleonic Empire until 1815 , and incorporated into the canton of Bergzabern in the department of the Lower Rhine . After the Wars of Liberation , the village came to Austria with the Congress of Vienna in 1815 and then to Bavaria a year later . From 1818 to 1862 Dörnbach belonged - as it was spelled at the time - to the Land Commissioner Bergzabern ; The Bergzabern district office emerged from this .

In 1939 the community was incorporated into the Bergzabern district. During the Second World War, the village suffered from repeated evictions and fire from artillery fire. After the war, the municipality within the French occupation zone became part of the then newly formed state of Rhineland-Palatinate. During the first Rhineland-Palatinate administrative reform changed the place on 7 June 1969 in the newly created district Landau-Bad Bergzabern, in 1978 in South County Wine Trail is renamed . In 1970 Dörrenbach became a state-recognized resort. Two years later, the community was assigned to the also newly formed Bad Bergzabern Association. 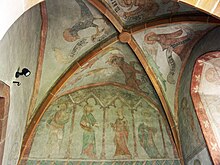 Frescoes in the choir of St. Martin's Church

Until 1531 there was a monastery on the Kohlbrunnenberg, which had to give way in the course of the Reformation. The Catholics belong to the Diocese of Speyer and are subordinate to the Landau deanery , the Evangelicals to the Protestant Church of the Palatinate . In 1928 a Protestant parish existed on site. In 2011, 47.5 percent of the population were Protestant and 34.9 percent Catholic. The rest belonged to another religion or were non-denominational.

The local council in Dörrenbach consists of twelve council members, who were elected in a personalized proportional representation in the local elections on May 26, 2019 , and the honorary local mayor as chairman. Template: future / in 3 years

Ralf Schmitt (IGD) became the local mayor of Dörrenbach on July 3, 2019. In the runoff election on June 16, 2019, he prevailed against the previous incumbent Reinhard Pelz (SPD) with a share of 51.45% of the vote, after none of the original four applicants achieved a sufficient majority in the direct election on May 26, 2019. Schmitt had already held the office from 2004 to 2011, after his resignation Pelz became his successor in November 2011. 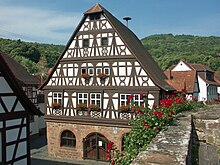 The St. Martin's Church with the cemetery fortifications

The main street and the military cemetery are designated as monument zones. There are also 20 individual monuments, including the following objects:

The Renaissance town hall , built in 1590 and 1591, is one of the most beautiful buildings in the Palatinate. The ground floor consists of ashlar masonry with arched windows and an arched driveway and used to be a one-room hall. A three-storey half-timbered gable with numerous carvings rises above it on the east side, which is closed off by a small whale set on the roof.

The Church of St. Martin is a fortified church . After a wooden predecessor building, its oldest parts date from around 1300 today. The defensive strength is expressed in the up to two meters thick walls and the fortification of the cemetery area. The church was expanded around 1510, repeatedly destroyed and rebuilt. Above the choir you can see the early Gothic ribbed vault from the time the church was built. The choir is decorated with paintings from the 14th and 15th centuries. The Vesper bell is particularly worth mentioning. It was the only one to survive all wars and, according to an appraisal during the renewal of the bells after the end of the war, is estimated to be 750 years old, making it one of the oldest bells in the Palatinate. According to legend, it should have rung the bell when Emperor Redbeard died. Since the order of the French director of December 21, 1684, St. Martin has been a simultaneous church , so it serves both denominations.

The pilgrimage chapel "Our Lady of Kolmerberg" is 100 meters higher than the place in the forest. It is one of the most famous and popular pilgrimage churches in the southern Palatinate. The chapel's first documents date back to 1470. In the course of its history it was destroyed and rebuilt several times, in its present form between 1804 and 1815 by the hermit Martin Schaaf. The chapel was renovated from 1973 to 1975. The former hermit's apartment now serves as an overnight accommodation for youth groups. The goal of the pilgrims was and still is the image of the Blessed Mother of God from the 15th century.

Since September 20, 2008 Dörrenbach has had an open-air theater at the entrance to the village. The main user is the “Dörrenbacher Eselsbühne e. V. “But numerous guests also appear here. The Dörrenbach men's choir, whose coat of arms points to 1868, has a long tradition. In addition, the Heimatbund Dörrenbach e. V.

There are several knight stones on the parish of the municipality . The number 16 of the knight stones bears the designation Krönungsbusch and indicates rallies on the occasion of the coronation of Napoleon Franz Bonaparte as King of Rome. The knight stones 24 and 25 in close proximity to each other mark a wayside shrine. Ritterstein 28 is located in the north-west not far from the border with Böllenborn and has the inscription Ehe. Iron ore mines . 194 The old picture refers to another wayside shrine that has since disappeared.

The community is a wine village and as such part of the Palatinate wine-growing region . There is a single vineyard site called Wonneberg . 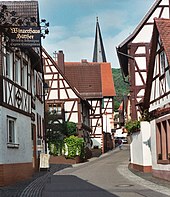 The public transport system is in the transport association Rhein-Neckar integrated (VRN). The community is connected to the local transport network via bus line 543, which connects the two train stations in Bad Bergzabern and Wissembourg . To operate the location, a stub drive is undertaken.

The center of Dörrenbach has no through traffic. The federal highway 38 runs in north-south direction through the district, with a connection to the federal highway 48 beginning there east of Bad Bergzabern. District road 22 branches off from the former, which connects the Dörrenbach settlement area to the road network and state road 508 to Bad Bergzabern. The state road 545 crosses the extreme east of the municipality marker in a north-south direction.

The German Wine Route passes east of the development . In addition, lead through the middle of the congregation of the predicate trail Palatinate wine trail and with a yellow bar marked Fernwanderweg Pirmasens-Belfort . A hiking trail that is marked with a blue cross and the one of the so-called Saar-Rhein hiking trails with the marking black point on a white bar , which leads from Saarbrücken to Rülzheim, run through the forest area . The Palatinate Almond Trail and the German Wine Route cycle path also run to the east of the development .

Cities and municipalities in the district of Südliche Weinstrasse