The municipality of Herxheim near Landau / Pfalz ( called “Herxe” in the local dialect ) in Rhineland-Palatinate is the largest municipality in the southern Weinstrasse district in terms of population . Herxheim is the administrative seat of the association of the same name and is designated as a medium-sized center according to state planning .

The local community is located in the Upper Rhine Plain in the east of the Southern Wine Route district. It consists of the core town of Herxheim and the district of Hayna in the south of the municipality , which are separated from each other by a forest area. The hamlet of Sandhof is located in the east of the district . The community also includes the “Neumühle”, “Am Wingertsberg” and “Am Schambach” residential areas .

The central body of water on site is the Klingbach , which flows in a west-east direction . The Rottenbach, designed as a drainage ditch, begins in the middle of an industrial park in the southeast of the municipality . In the far east of the municipality on the border with Herxheimweyher, it takes up the Saugraben flowing a little further south from the right .

The Herxheim area was already settled in the Neolithic Age. To the west of Herxheim, the remains of an approximately 7,000 year old settlement were discovered with the Herxheim mine . Franconian settlers founded the place in the 6th century . Harieschaim was first mentioned in 773 in a document for the Weißenburg monastery , when a Sigibald transferred his property to the monastery. As part of the so-called “ Weissenburg Abbey Robbery” (985/991), the Salians wrested Herxheim and other possessions from the monastery. Under the Saliern, a church was built on the Kirchberg in 1004, of which the lower part of the bell tower has been preserved. In 1057 Herxheim came back into spiritual possession through a donation from the Salian emperor Heinrich IV , namely to the Speyer monastery . Herxheim stayed with this for around 600 years and was subordinate to the Lauterburg Oberamt .

After the Peace of Nijmegen in 1678/79, Herxheim and all the communities south of the Queich fell to France. From 1798, when the Palatinate was part of the French Republic (until 1804) and then part of the Napoleonic Empire , the municipality was incorporated into the canton of Landau in the department of the Lower Rhine . In 1814 the community had a total of 2,675 inhabitants. A year later the place belonged initially to Austria . In 1816, after the Congress of Vienna , the Palatinate became the eighth province of the Kingdom of Bavaria . Herxheim belonged from 1818 - still as part of the canton Landau to the Landau Landau commissioner ; from this the district office of Landau emerged in 1862 . While it was part of Bavaria, the school was inaugurated (1824), the first tobacco factory was founded (1879) and the Herxheim – Landau railway line opened (1898).

From 1939 the place was part of the Landau district in the Palatinate . After the Second World War , Herxheim became part of the then newly formed state of Rhineland-Palatinate within the French occupation zone , which ended the Bavarian era. During the first Rhineland-Palatinate administrative reform changed the place on 7 June 1969 in the newly created district Landau-Bad Bergzabern, in 1978 in South County Wine Trail is renamed . Three years later it became the seat of the also newly formed association of the same name . On March 17, 1974, the previously independent neighboring village of Hayna was incorporated.

There was a synagogue on site from 1842 , which fell victim to the November pogroms in 1938 . The Jews living in Herxheim were buried in Rülzheim .

The municipal council in Herxheim consists of 28 council members who were elected in a personalized proportional representation in the local elections on May 26, 2019 , and the honorary local mayor as chairman.

The honorary local mayor is directly elected for a term of 5 years.

In the runoff election on June 16, 2019, the non-party Hedi Braun was elected as the new local mayor, after none of the original four applicants had achieved a sufficient majority in the direct election on May 26, 2019. On August 15, 2019, she was introduced to her office as local mayor. She has also been the mayor of the Herxheim community since 2015.

In May 2000, Herxheim was the first local parish in the Südliche Weinstrasse district to introduce a youth parliament . It looks after the needs of young people from the local congregation and comprises twelve members who must be between 14 and 18 years of age to be elected. The election takes place every two and a half years by majority vote.

The youth parliament has, among other things, the possibility of organizing events. For example, panel discussions for young people on the occasion of federal or local elections.

Partnerships are maintained with Ilfracombe in England and Saint-Apollinaire in France .

Skull from the Herxheimer finds. It is located in the museum of the Institute for Geosciences at the Ruprecht-Karls-Universität Heidelberg .

In the period from 1996 to 1999, a settlement of the linear ceramic culture was excavated in the run-up to the western industrial area . The excavations continued in 2005 and 2006 due to unusual results. The investigations are ongoing. The settlement existed from the older band ceramics (Flomborn phase) to the youngest band ceramics, namely around 5300-5150 BC. Chr.

To the south of it a large number of pits were found that were so close together and repeatedly overlapped that at first the impression of two ditches running around the village was created. This trench system was later recognized as an earthwork . In the pits that can be assigned to the youngest section, there were a multitude of human bones, many of them broken, almost always detached from the anatomical association. The number of at least 450 skulls (if the excavation of the mine has not yet been completed) proves that many more people were buried in Herxheim than could have lived there during the most recent phase of the ceramic band. Numerous other finds were also found in the pits, such as pottery , flint or millstones, many of which were also deliberately destroyed.

The examination of the bones cleaned of lime sinter and the traces of cuts on them led Bruno Boulestin, an anthropologist from the University of Bordeaux , to the assumption that the bones found were remnants of cannibal meals. The incision marks indicate that the skin has been peeled off, tendons have been severed to sever limbs, and body parts have been systematically fleshed. The traces are comparable to those found on the bones of slaughtered animals. Analyzes of the collagen contained in the bones also clearly indicate that this has been heated by boiling and partially destroyed in the process. Likewise, scorch marks on some skulls are interpreted to mean that these skulls were damaged by briefly acting heat of fire. Because brand-typical discolorations could only be found on the front teeth, but not on the molars. The scientists involved in the study pointed out that traces of this kind always occur when a person's lips roll up from being burned and expose their front teeth, while the molars are usually better protected from the effects of fire by the thicker muscle flesh of the cheeks. A massacre could be ruled out due to the lack of combat injuries. So ritual sacrifices or killing of prisoners would be conceivable.

The archaeologist Andrea Zeeb-Lanz pointed out that there was no real proof of the cannibalism thesis, such as the detection of human myoglobin in feces. In addition, the number of deaths related to the duration of the settlement would mean that human flesh had been a staple food for the band ceramists for years. Examination of the isotopes strontium-86 and strontium-87 in the tooth enamel of 54 individuals showed that they came from granite-rich mountainous regions. So they were not band ceramists who only settled on loess-rich valley plains for agricultural reasons .

The Herxheim Museum , which opened in November 2004, is located on site and contains the permanent exhibition “Stone Age in the Barn Cellar”, which in turn is dedicated to the ceramic band and its local finds.

The Waldstadion special sports facility is a multi-purpose facility for horse racing, motorcycle racing and football.

Herxheim is known nationwide for the motorcycle races that take place there. The Waldstadion offers a 1000 m sand track, on which, among other things, the so-called Father's Day race takes place every year on Ascension Day, in which the world's best long-track drivers usually take part. Several times (1984, 1990, 1996, 2001) the Waldstadion has already hosted the long track world championships in both the solo and the team class . The organizer of the races is the Motorsport Association Herxheim (MSVH), for which the multiple long track world champion Gerd Riss competed.

The soccer team of SV Viktoria Herxheim played for a few years in the Oberliga Südwest and took part in the DFB Cup in 1991/92 .

The Waldstadion offers a 1,100-meter-long grass runway for horse races and a 1,000-meter sand track for trotting races. Both lanes are left course. The racing and riding club Südliche Weinstrasse Herxheim also has a 900 m gallop training sand track and organizes horse races. 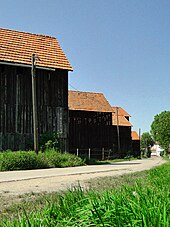 Herxheim is still strongly influenced by agriculture. Numerous, mostly wooden tobacco sheds have been preserved in the municipality . Tobacco cultivation was introduced in Herxheim around 1860. The older raised sheds are usually on the farm premises, while the newer flat sheds are usually on the outskirts or directly in the fields. On Bruchweg, several older sheds form the only shed road built on both sides. After the end of the subsidies for tobacco growing by the EU , this branch of industry, which for decades had shaped the townscape with its distinctive scales for drying tobacco, has come to a complete standstill. The cultivation of vegetables, including downstream sectors such as vegetable wholesaling and logistics, is strongly represented.

From the 1950s, the municipality was the location of Akkord-Radio until the company was taken over by other companies. It is also the headquarters of the Hetzler Busreisen bus company , the Electrical Heaters business unit of the Eberspächer Group. The Eberspächer catem GmbH & Co. KG is based in the industrial area West. In addition, there are two large furniture stores in Herxheim, Ehrmann-Gilb and Weber . The confectionery factory Eugen Trauth & Söhne has existed since 1911 . B. Chocolate kisses are mainly marketed in direct sales. In the Hayna district there is the Zur Krone restaurant , headed by chef Karl-Emil Kuntz , a gourmet restaurant with a Michelin star and 18 out of 20 possible Gault Millau points.

Herxheim is connected by bus lines to Landau (555), Kandel (554) and Rülzheim (555, 557). The bus routes are synchronized with the local train stations. A call taxi (line 5929) operates within the Herxheim community.

From 1898 to 1983 passenger trains ran on the railway line between Landau and Herxheim , reactivation and continuation to Rülzheim was examined by the state of Rhineland-Palatinate in 2003, but was initially rejected. However, a route security agreement still exists.

The grammar school has existed in the PAMINA school center in Herxheim since 1995 .

Cities and municipalities in the district of Südliche Weinstrasse

Local communities of the Herxheim association in the southern Weinstrasse district